YouTuber Nabela Noor is using her social media platform to help find a missing woman who made a tearful appearance in one of her viral videos a few years ago.

Melida Sandoval, 36, from Montebello, California, has been reported missing by her family and was last seen leaving her home on September 1, nearly two years after she appeared on Nabela’s show The Bright Fight.

Nabela, 29, took to Twitter last Friday to retweet a message about Melida’s disappearance, writing: ‘I am at a loss for words. This beautiful soul, Melida is missing. I am thankful to know her and call her a friend. Please PLEASE RT & share. Her name is MELIDA SANDOVAL. PLEASE SHARE!’ 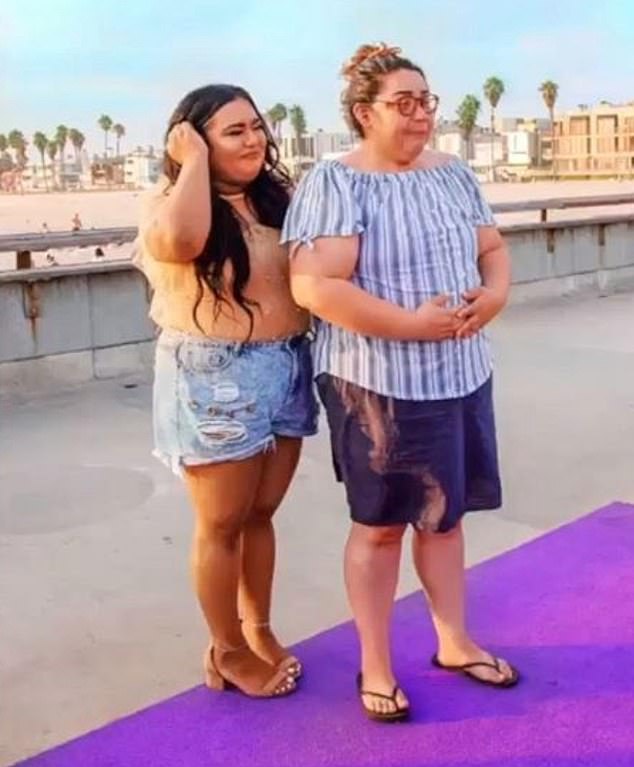 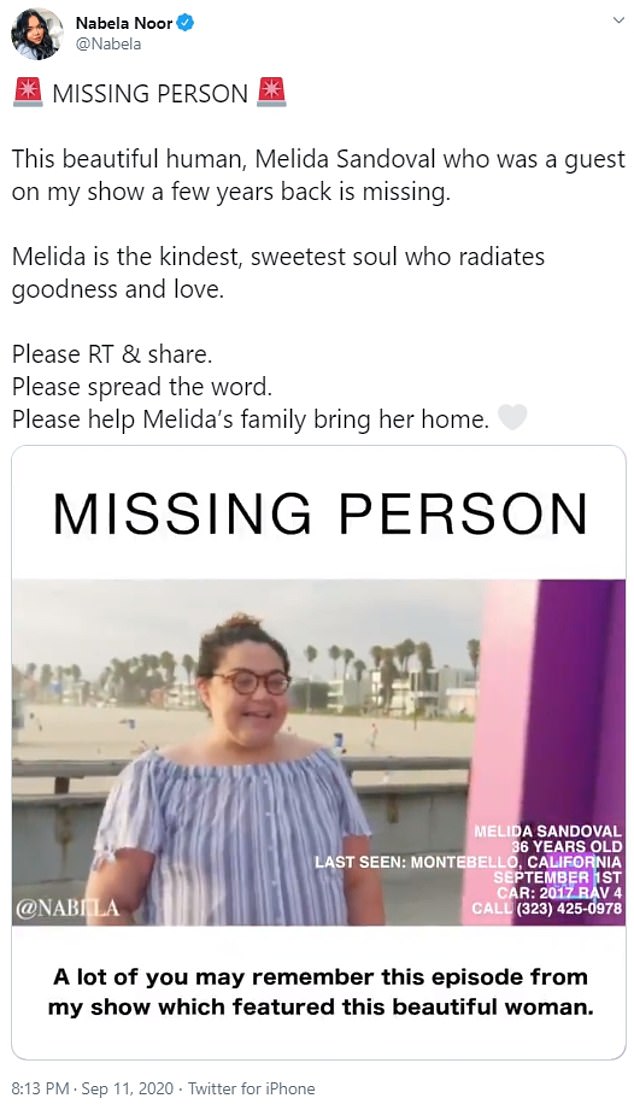 Call to action: Nabela, 29, tweeted about Melida’s disappearance and also shared footage of her on her show The Bright Fight on her Instagram and TikTok pages

The Bangladeshi-American beauty vlogger later shared footage of Melida on The Bright Fight on her Instagram and TikTok pages to try and help find her.

In the episode, Nabela set up a talking mirror in the middle of Venice Pier and asked people about their relationship with their image.

When Melida walked in front of it, she explained that she had a difficult day because someone at work had just called her ‘fat’ and ‘ugly.’

‘I hope that when you look in the mirror you see the beautiful girl I see,’ Nabela replied. ‘If you had a mirror back home that could talk back to you, what would you want the mirror to tell you?’ 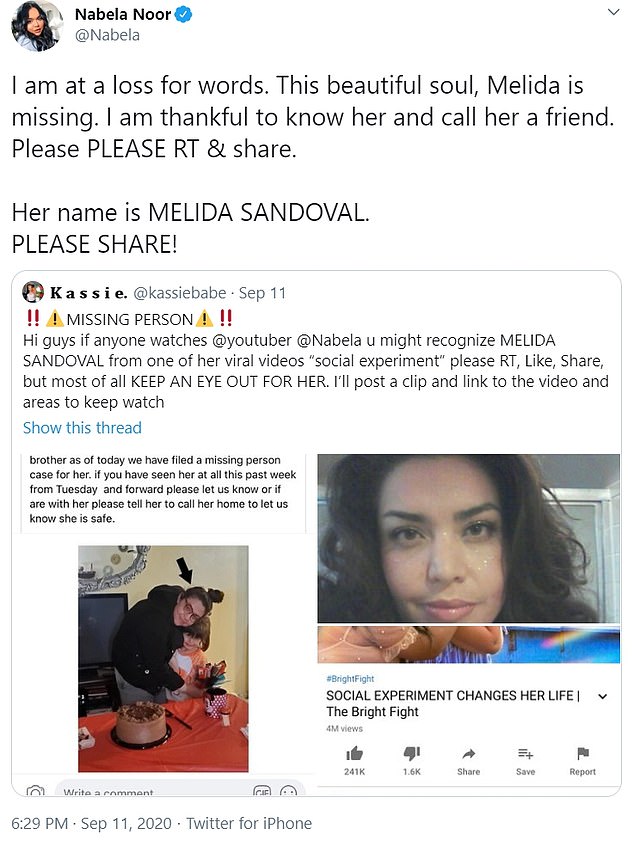 Getting the word out: Nabela, who called Melida a ‘beautiful soul’ in her tweets, asked her followers to share her message 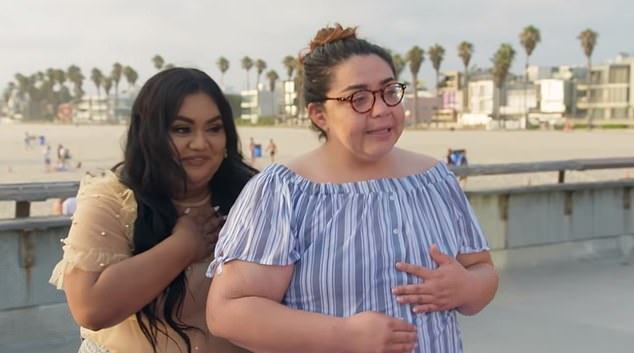 Candid: Melida was a part of Nabel’s viral social experiment that was featured on her show The Bright Fight in 2018. Melida cried as she opened up about her struggles with self-confidence 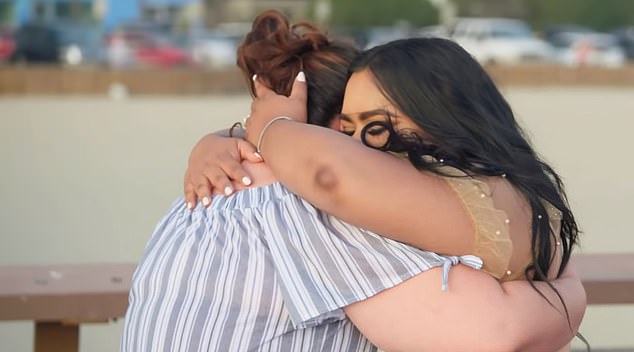 Heartwarming moment: Nabela hugged Melida as she cried and insisted that she was beautiful and needed to believe it

‘That I look pretty, that it doesn’t matter what other people say,’ Melida said as she began to cry.

Nabela suggested she try looking in the mirror and telling herself that she is beautiful, but Melida was hesitant.

‘I could say it, but do I really mean it? Probably not,’ she admitted.

Nabela came out from behind the mirror to give her a big hug as she sobbed. The YouTuber stood by her new friend’s side as she encouraged her to look in the mirror and say she is beautiful.

When the beauty guru reposted the clip, she made a banner denoting that Melida is a missing person. She also included her age and last known whereabouts. Melida was last seen in Montibello on September 1, driving a 2017 Toyota RAV4. 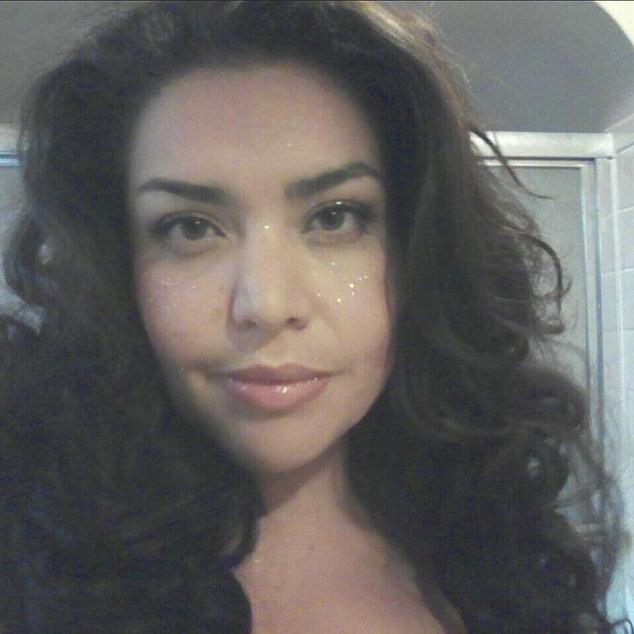 Missing: Melida was last seen leaving her home in Montebello on September 1

Help: Melida’s older brother Marco revealed she was missing on her Facebook page on September 7 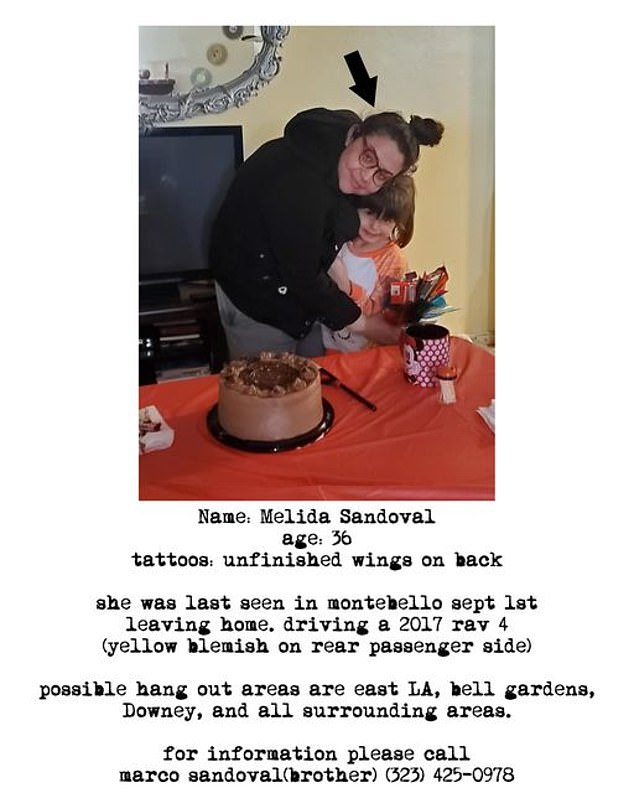 Reach out: Anyone with any information about Melida’s whereabouts is asked to call her brother Marco

‘This beautiful human, Melida who was a guest on my show a few years back is missing,’ Nabela captioned the video. ‘Melida is the kindest, sweetest soul who radiates goodness and love.

Melida’s older brother Marco revealed she was missing on her Facebook page on September 7.

‘As of today we have filed a missing person case for her,’ he wrote. ‘If you have seen her at all this past week from Tuesday and forward please let us know or if are with her please tell her to call her home to let us know she is safe.’

On this website and endless choice members exchange messages each day