During lockdown many Brits have battled piling on the pounds, with gyms closed and working from home meaning greater proximity to the biscuit tin.

But some have used it as an opportunity to kickstart a healthier regime and have even managed to lose weight – including Georgia Allen, who’s shed an incredible four stone.

The 23-year-old from High Wycombe has shrunk from a size 16 to a trim size 10 thanks to less socialising, daily workouts and following the SlimFast plan, and says she has never felt more confident in her own body.

Speaking to FEMAIL, Georgia admitted she probably wouldn’t have started her weightloss journey if it wasn’t for Covid-19. 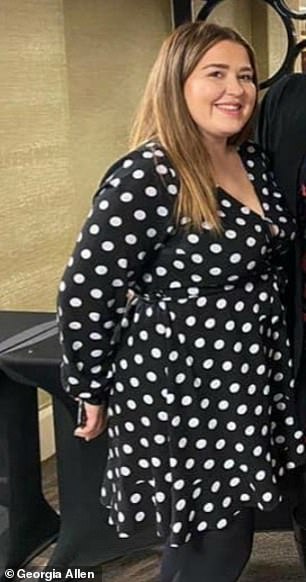 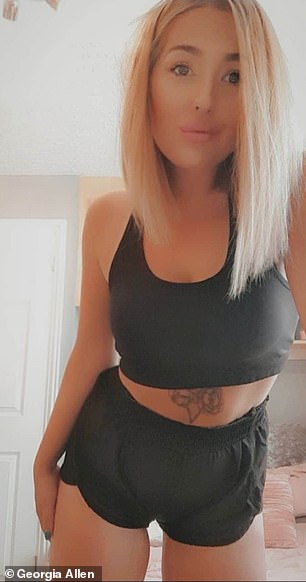 Georgia Allen has shrunk from a size 16 (left) to a trim size 10 (right) by following the SlimFast plan, and says she has never felt more confident in her own body

‘Lockdown was very testing for losing weight but I was determined to do it and not to undo any hard work,’ she said.

‘I’m so proud of what I have achieved! If it wasn’t for lockdown I probably wouldn’t have started my weight loss journey – I suppose that’s one positive I will take from all this.’

A Public Health England report has revealed overweight people are more than three times as likely to die of Covid-19 than those of a healthy weight.

People who have extra weight, defined as a body mass index of over 25, are also at higher odds of needing ventilation when ill with Covid-19 by seven-fold. 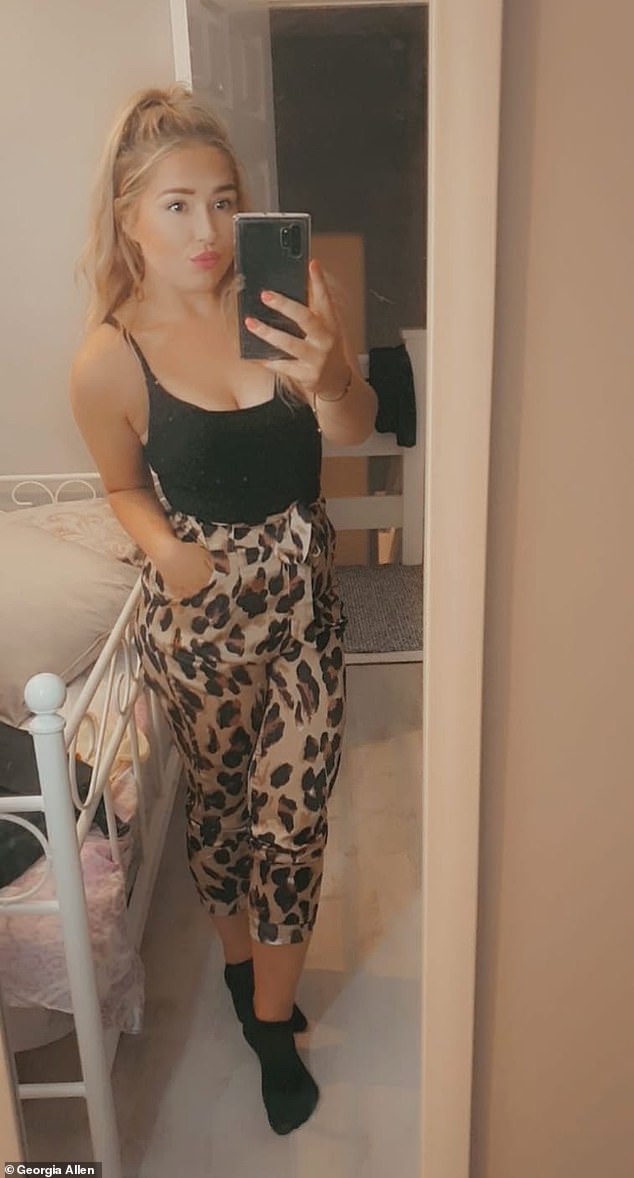 Speaking to FEMAIL, Georgia admitted she probably wouldn’t have started her weightloss journey if it wasn’t for Covid-19

The report said excess weight does not seem to increase people’s chances of contracting Covid-19, but said excess fat can affect the respiratory system and is likely to affect immune function.

It was reported that if everyone who is overweight lost 5lbs, it could save the NHS more than £100 million over the next five years.

Georgia, who tipped the scales at 13st 8lbs, had been unhappy with her weight for some time. 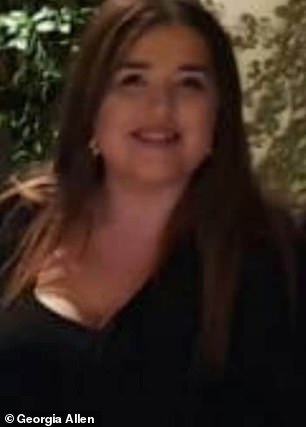 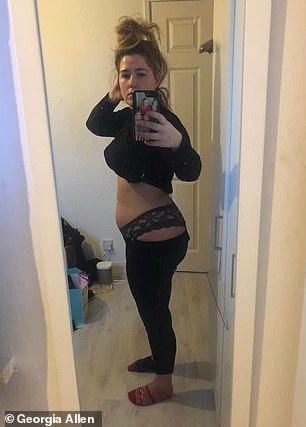 Georgia, who tipped the scales at 13st 8lbs (left), had been unhappy with her weight for some time. Pictured right during her weightloss journey 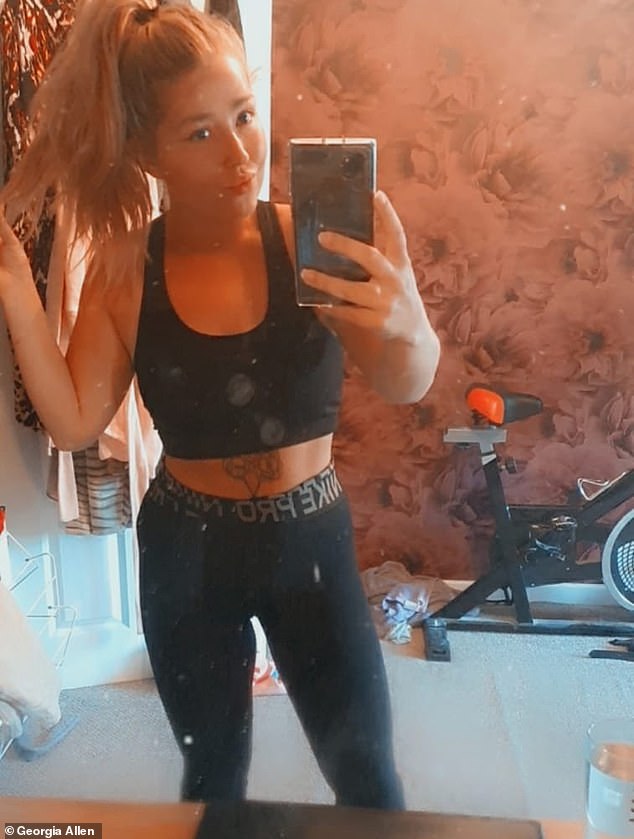 Having seen her sister follow the SlimFast plan and see good results, when lockdown hit Georgia decided to give it a go – and says it’s changed her life

‘In February this year, just before lockdown, I went on holiday to Spain,’ she explained.

‘It was meant to be a relaxing time away with friends but all I could think about was my weight.

‘I was uncomfortable and lethargic. Every morning I would get dressed into my swimwear and summer clothes and feel deflated when I looked in the mirror.’

Having seen her sister follow the SlimFast plan and see good results, when lockdown hit she decided to give it a go.

‘I’m usually out and about all the time but like everyone else, due to lockdown, I’ve been home more than ever,’ she said.

‘I was amazed at how simple the plan was – the meal bars and shakes were really filling so I was never hungry.

‘Before lockdown I felt bloated and unhappy, but I’m coming out of it having lost over four stone and feeling fantastic and with so much more energy!

Dinner: 600 calorie meal such as a grilled chicken salad.

‘I’m not considered high risk but following the recent news about the links between weight and coronavirus I’m really pleased I have lost weight and feel at my best.’

‘My average day consists of a 30 minute HIT workout followed by a banana shake for breakfast,’ she said.

‘I would then have an apple or banana as a mid-morning snack, and for lunch I tend to have the yoghurt fruit crunch high protein meal bar.

‘Mid-afternoon I will enjoy a SlimFast chocolate caramel snack bar and for dinner I eat a 600 calorie meal like a grilled chicken salad.’

She told FEMAIL she hit rock bottom in May after her daughter’s father passed away last year.

‘Such a tragic family event had left me feeling really scared,’ she said. ‘I felt very down, I had no energy and didn’t like what I saw in the mirror.

‘I was uncomfortable in clothing, my bras would dig in. I found general exercise, even walking, tough to do which would make me feel even worse. I was stuck in a horrible cycle of feeling sad and alone.

Rebecca Beardmore, 36, from Cheshire, has also managed to drop almost two stone during lockdown. Pictured left before and right after

‘I knew I was leading an unhealthy lifestyle and wanted to better myself, not just for me but for my daughter, to set a good example to her with exercise and food. It was a new beginning.’

Rebecca, who tipped the scales at 16st 6lbs, had tried ‘every diet under the sun’ in the past but claimed nothing worked until she tried SlimFast.

‘I wanted a plan that was easy, affordable and readily available, plus that had lots of support and great results,’ she explained. 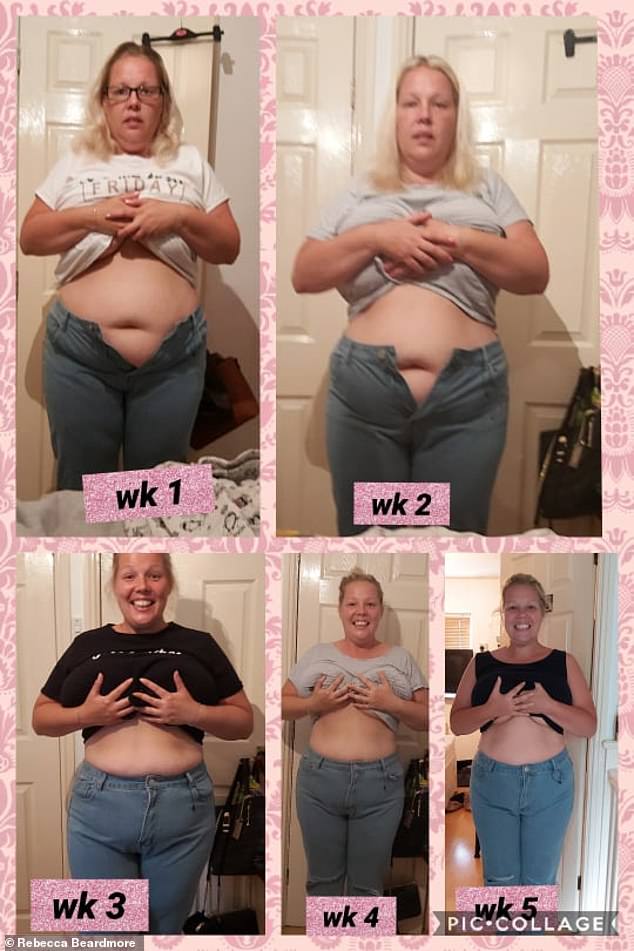 Rebecca, who tipped the scales at 16st 6lbs, had tried ‘every diet under the sun’ in the past but claimed nothing worked until she tried SlimFast

‘I used lockdown as a time to focus on my diet and take time for me. I’ve definitely found it harder being at home more of the time – it’s hard to not make a few extra trips to the treats cupboard.

‘However, seeing the result on the scales was the motivation I needed. I love the flexibility of the plan and there’s lots of help and advice in apps and closed groups on social media.

‘I love that on SlimFast there’s no deprivation, you can eat up to six times a day, so you can enjoy your favourite snacks without worrying.’ 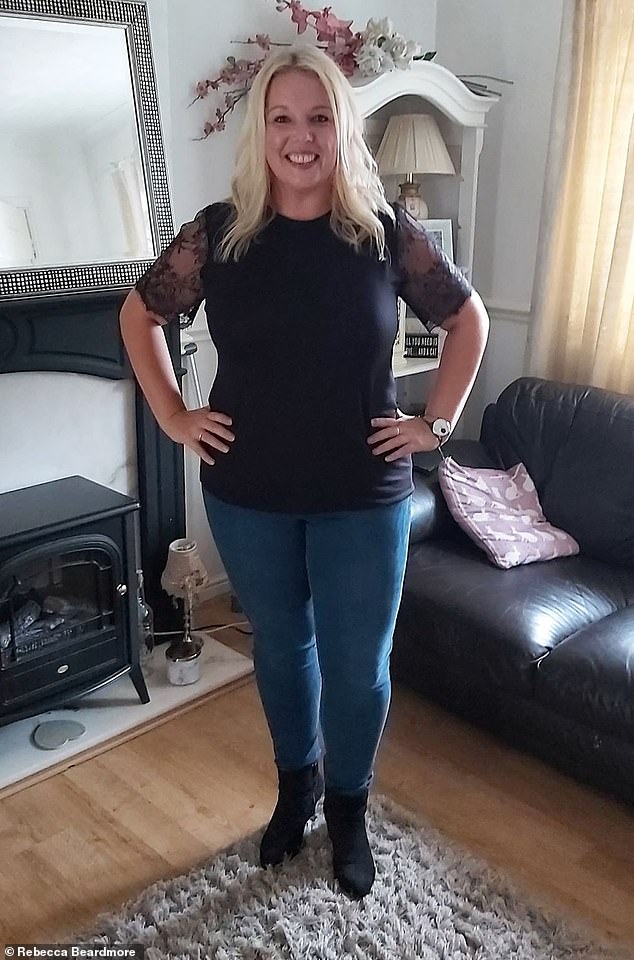 Rebecca has slimmed down to 14st 10lbs and now exercises five times a week.

‘I no longer suffer with headaches and my energy is through the roof,’ she added. ‘I love seeing my progress pictures and I’m a much happier person who is now comfortable in her own skin.

‘The positive comments from family and friends have kept me going and since seeing my results lots have decided to follow the plan too.’