The Windsors viewers were left ‘rolling on the floor laughing’ after Meghan Markle’s character, played by Kathryn Drysdale, decided to cheer up the nation post-Brexit by writing empowering messages on bananas.

In last night’s episode of Channel 4’s satirical royal soap, the country was divided and so the government asked the royal family to bring some positivity to Britain.

As a result, Meghan’s character decided to go on a speaking tour telling people not to eat avocados due to the way they are unsustainably produced, before attempting to empower the public with positive messages handwritten on bananas.

And viewers were left in hysterics with the scene – which was a reference to the Duchess of Sussex‘s real-life visit to a sex worker charity in Bristol in February 2019, where she wrote empowering notes on the fruit.

‘When you get home, make sure you watch The Windsors on C4 catch up, then you’ll know what I mean when I say “Bananas & Avocados.” Rolling on the floor laughing,’ wrote one, while a second joked: ‘I want a free banana with a slogan on it.’ 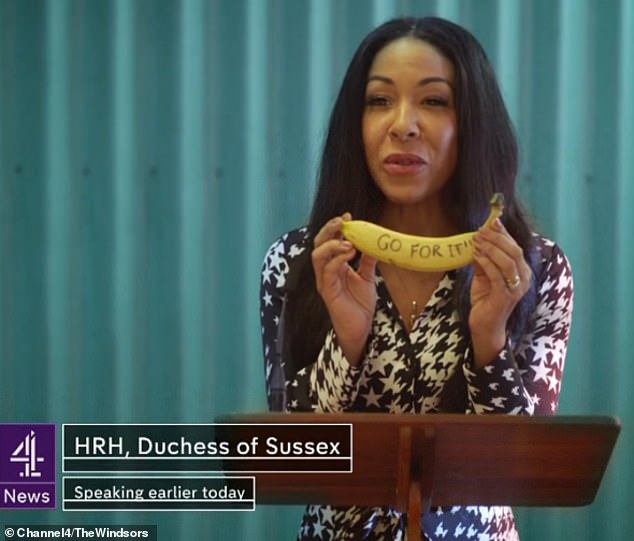 In last night’s episode of Channel 4’s satirical soap comedy The Windsors, Meghan Markle’s character was seen trying to cheer up the country by writing positive messages on bananas (pictured) 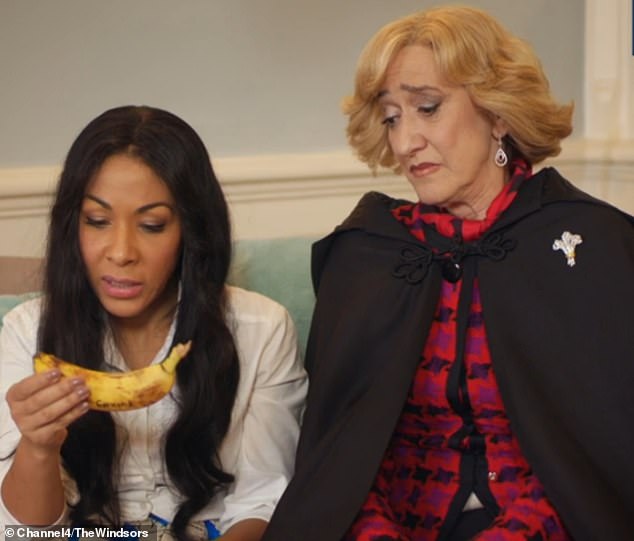 With Charles, Anne, Edward and Andrew on strike, Camilla’s character wanted the ‘Fab Four’ to join them, and hatched a plan to make Meghan think Kate was mocking her banana idea. Pictured, showing the duchess a supposed banana from Kate

Viewers were quick to take to Twitter, with one joking: ‘I want a free banana with a slogan on it’ (pictured)

At the beginning of the episode, which takes a tongue-in-cheek look at the lives of the royal family, Prince Harry and Meghan Markle sat down with Prince William and Kate Middleton, played by Hugh Skinner and Louise Ford, and brainstormed ways to perk up the country.

‘I could go on a speaking tour telling people not to eat avocados,’ suggested Meghan. ‘This may be a super food but the way this food is produced is anything but super.’

And when Kate questioned whether it was really a good idea, Meghan replied: ‘Do you think I want to speak out against avocados?’

‘Can you imagine what a bitter blow it was for me personally to find out the food I love filled with omega 3 oils, proteins and vitamins is unsustainably produced?’ 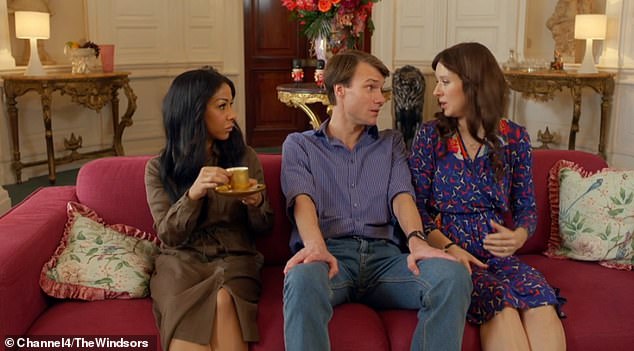 Meghan Markle, Prince William and Kate Middleton (pictured, as the characters in the satirical soap) sat down and brainstormed ideas to try and cheer up the country following Brexit

In the next scene, Meghan can be seen speaking at a press conference with a banana in hand, with the logo ‘go for it!’ written on the front in a black marker pen.

‘If you know someone who is struggling, why don’t you give them a banana with a validating logo up the side?’ she said. ‘What’s the worst that could happen? They get a free banana! But now, I’d like to say a little something about avocados…’

After watching the broadcast, and with Charles, Anne, Edward and Andrew on strike – and wanting the ‘Fab Four’ to join them – Camilla, played by Haydn Gwynne, came up with a plan to drive a wedge between them.

Dressed as a witch in a black cape, she paid Meghan a visit at Frogmore Cottage, and made her believe Kate Middleton’s character had mocked her banana messages.

‘I wanted to congratulate you in person on your recent addresses on fruit and veg,’ Camilla said, to which Meghan replied: ‘Bananas and avocados are something I feel passionate about. You really get me, don’t you?’

Camilla then revealed she had noticed Kate being less supportive and showed her a video of the Duchess of Cambridge’s character signing her own bananas – before handing her an actual banana she had supposedly written on.

‘That nosy Yank should shut her gob,’ it read on the front of the fruit.

And those who tuned in were left both amused and full of praise for Haydn Gwynne, who played Camilla.

‘Camilla is on top form again,’ wrote one, while a second added: ‘Camilla is a work of art.’

A third commented: ‘The Windsors…the gift that just keeps on giving.’ 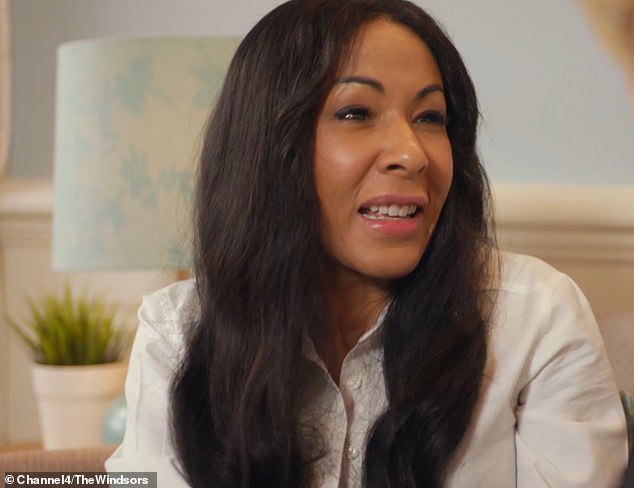 Meghan Markle, played by Kathryn Drysdale (pictured), was made to believe Kate had been mocking her banana messages

Many who tuned in were full of praise for Haydn Gwynne, who played the role of Camilla in the satirical soap opera