A couple who were shocked by how fat they looked when they appeared on TV’s A Place In The Sun in 2019 have shed a combined total of 12st.

Lisa, 49, and Paul Sanderson, 46, from Barnsley,in South Yorkshire, said they went to Spain expecting to gain a new house but were devastated by how much weight they had gained too.

At their heaviest, Lisa ballooned to 17 stone 2lbs and a size 22, while Paul, who has since slimmed down to 12st, tipped scales at a hefty 16 stone 7lbs and could just about squeeze into XXL clothing.

The couple, who were excited for their TV debut, decided to overhaul their lifestyle by following a Weight Watchers diet plan after Lisa, who now weighs 10st and wears a size 12 dress, was left horrified by their appearance – exclaiming ‘oh my god I’m so fat’. 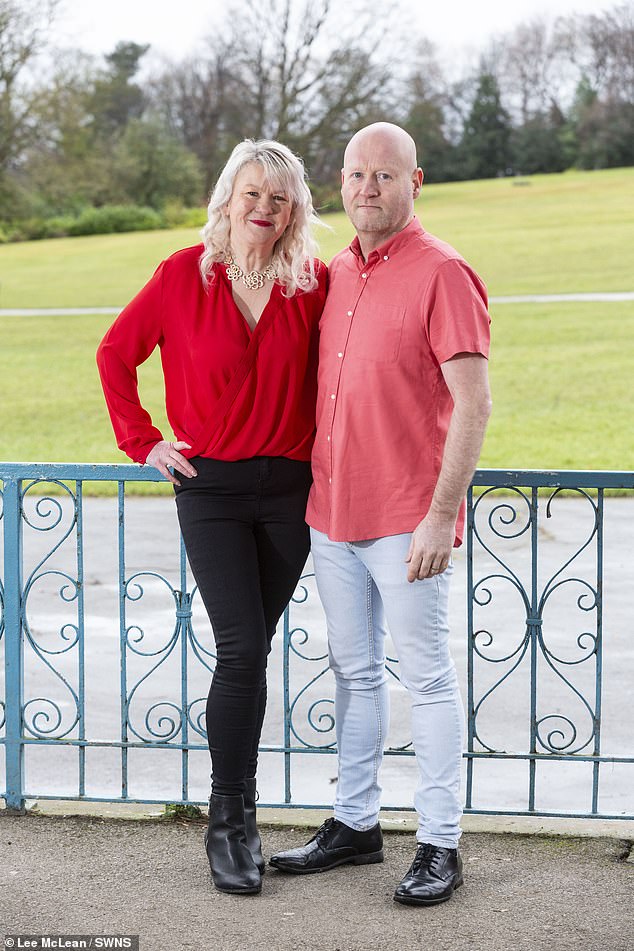 Lisa, 49, and Paul Sanderson, 46, (pictured) from Barnsley, South Yorkshire, have shed a combined total of 12st after seeing themselves on TV 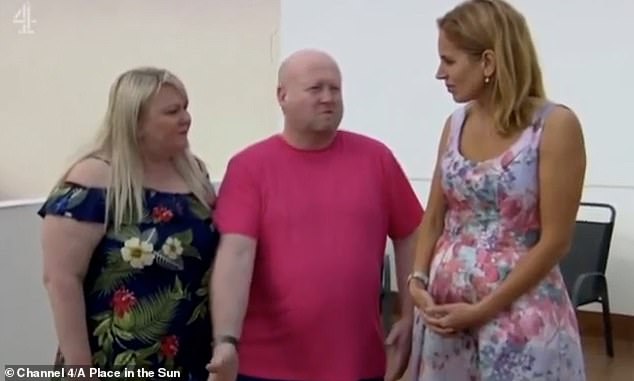 The Sandersons fell in love with a £72,500 three-bedroom bungalow in Torrevieja, on the sun kissed Costa Blanca in Spain which was their ‘dream home’.

But the Channel 4 show, which aired in July 2019 and was filmed in April that year, was bittersweet and made the couple realise they needed to make a change.

Lisa says her weight spiralled after struggling through chemotherapy when she was diagnosed with an aggressive breast cancer in 2015.

Having had five chemotherapy sessions and a limo ride home when she got the all-clear, the nurse decided to ‘enjoy life’ and began to scoff down all of her favourite foods.

And Paul was shocked to see how heavy he had got as well, weighing 16st 7lbs during the summer of 2019. 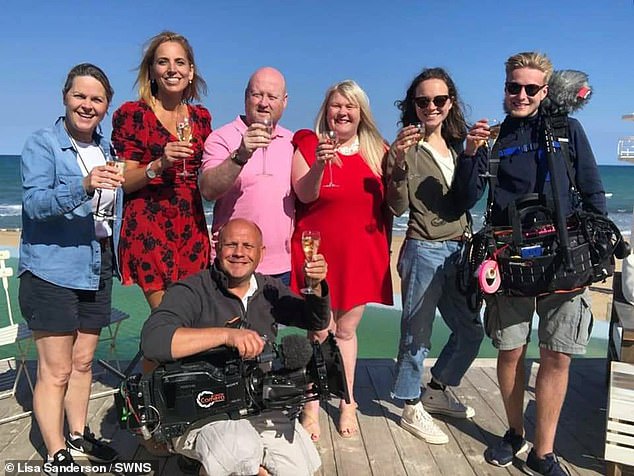 Lisa, who weighed 17 st 2lbs at her heaviest, revealed her weight ballooned after being given the all-clear from cancer. Pictured: Paul and Lisa (centre) with the film crew for A Place In The Sun 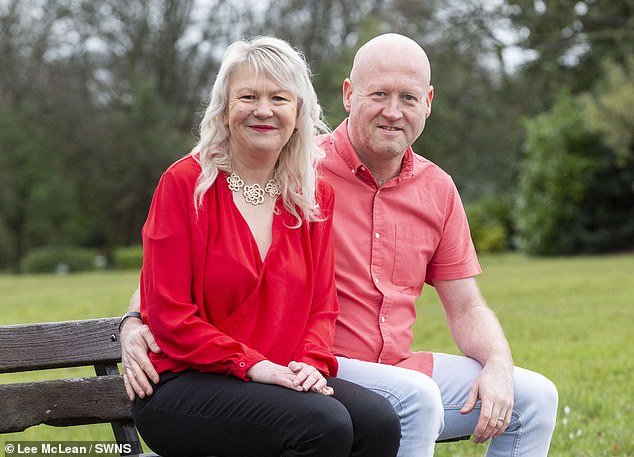 The determined pair were able to shed a combined 12 stone in just over a year by revamping their diet and walking to work instead of taking lifts in the car.

Lisa, who now weighs a limber 10 stone and wears a size 12 dress, down from size 22, said she feels ‘healthier than ever’.

Meanwhile, Paul has slimmed down to 12 stone and fits snugly in M sized clothing, down from XXL just over a year before.

Lisa said: ‘Seeing yourself on telly is so different. We knew we had to do something. 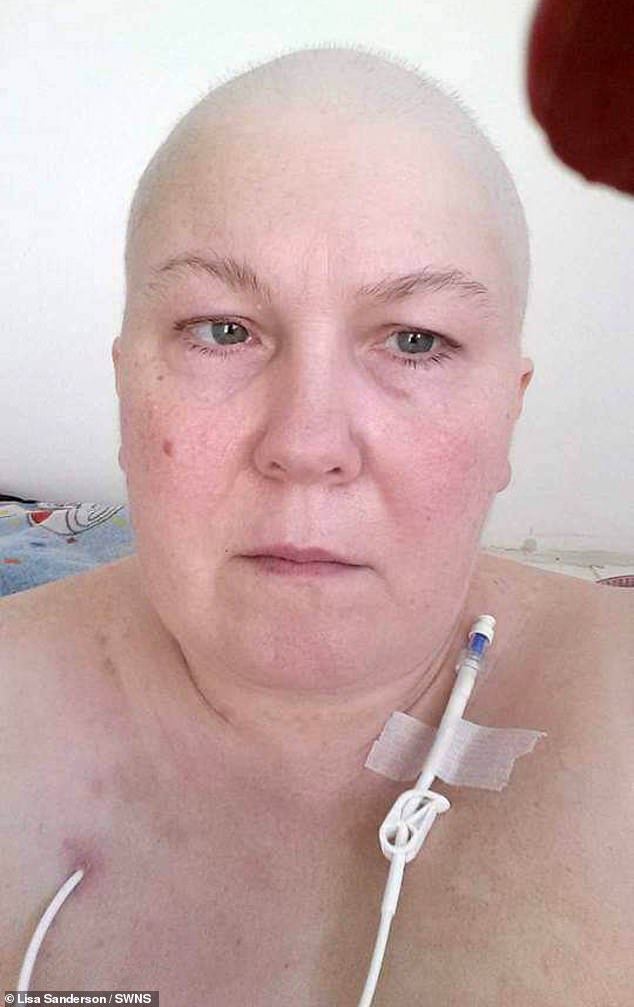 Lisa said she began eating all of her favourite foods after chemotherapy because they were focused on enjoying life. Pictured: Lisa in hospital during chemotherapy 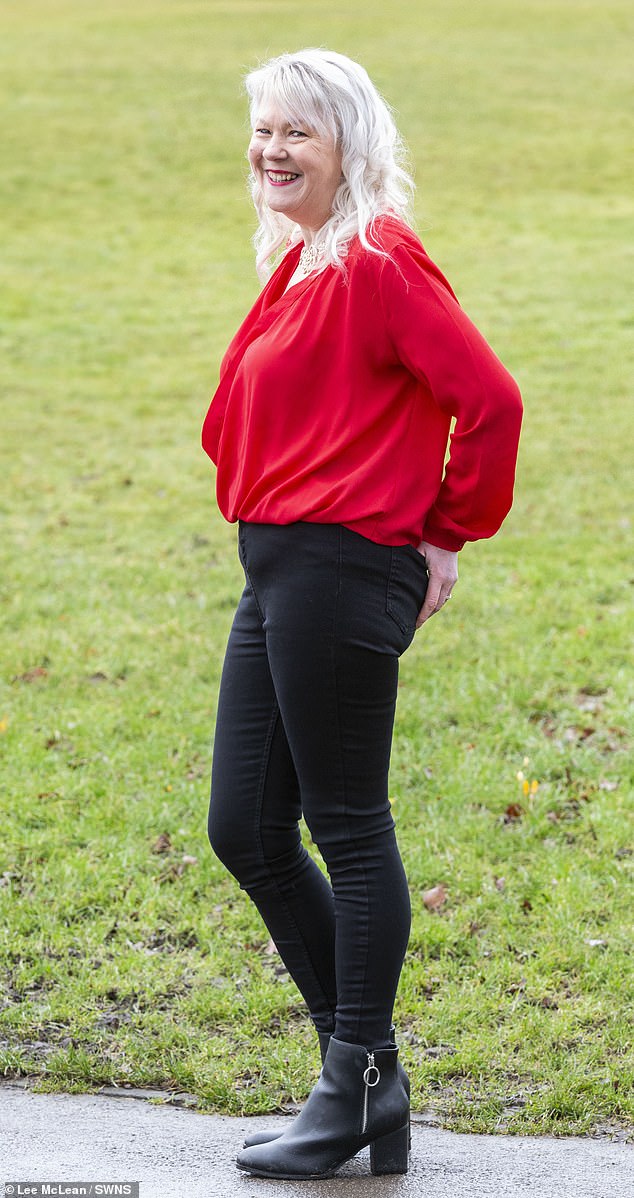 ‘When I finished my chemo treatment we were so into enjoying life we weren’t thinking about that – I was just eating all my favourite food and living.

‘We both feel so good now, we feel so much better both physically and mentally. This has really changed our lives. We feel healthier than ever.’

The mother-of-three said her life turned upside down when she was diagnosed with Stage 3 neuroendocrine breast cancer in March 2015. 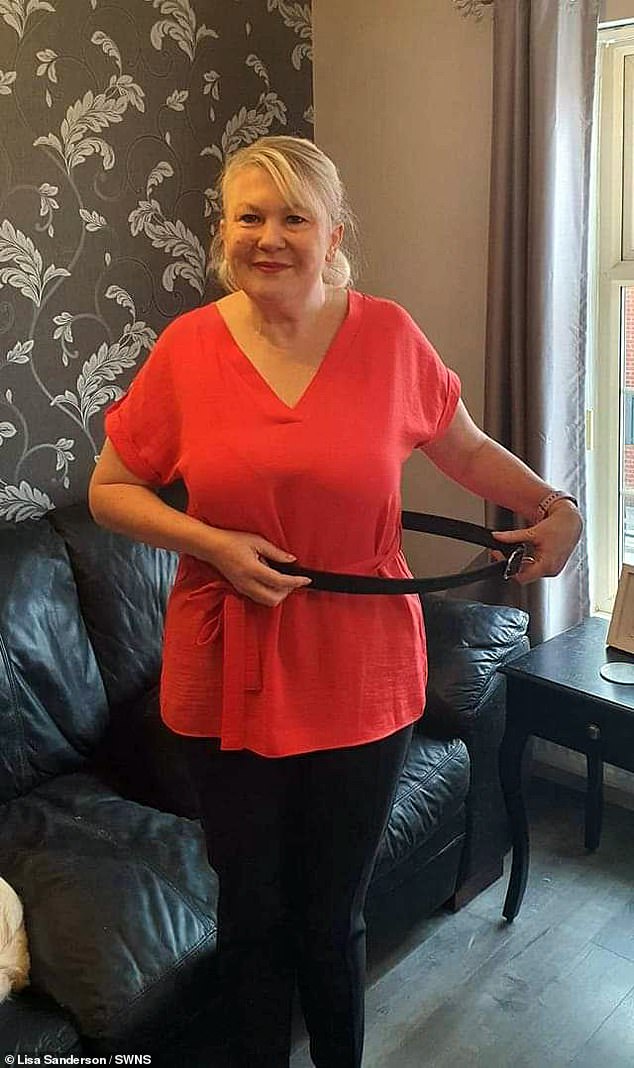 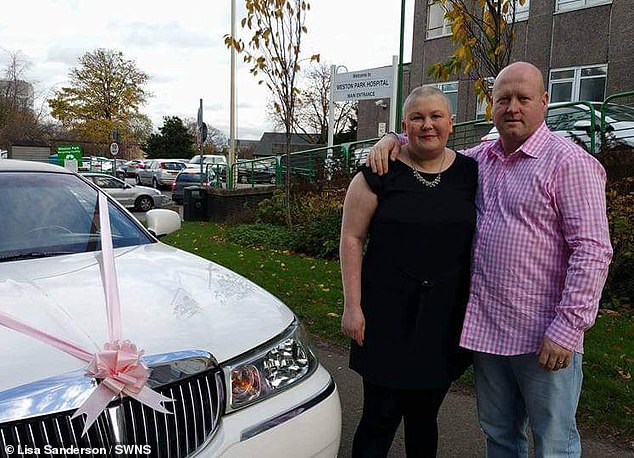 Lisa explained getting their dream house motivated their lifestyle change because they want to be able to enjoy it for years to come. Pictured: Lisa and Paul, before 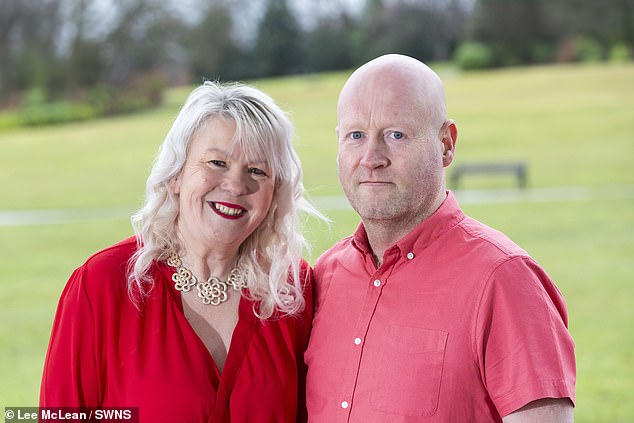 Lisa said she wanted to enjoy herself after overcoming cancer, however ‘maybe’ they enjoyed themselves ‘too much’. Pictured: Lisa and Paul, now

Lisa said she just wanted to enjoy herself after beating cancer – but admits she overdid it, saying: ‘maybe enjoyed myself too much’.

She explained that they were motivated to get healthy as they had finally gotten their dream home and wanted to be able to enjoy it as a healthy couple for many years to come.

The grandmother-of-six continued: ‘When you get better you just want to enjoy yourself but maybe I enjoyed myself too much.

‘I beat cancer, we have our dream house, I want to live to enjoy it all and, at my weight, I probably would have had more health complications.’ 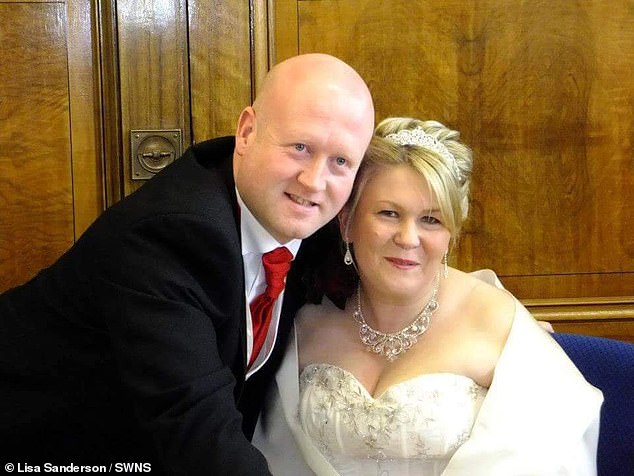 Paul and Lisa began battling to see who could lose the most weight each month, while following a Weight Watchers diet plan. Pictured: The couple before 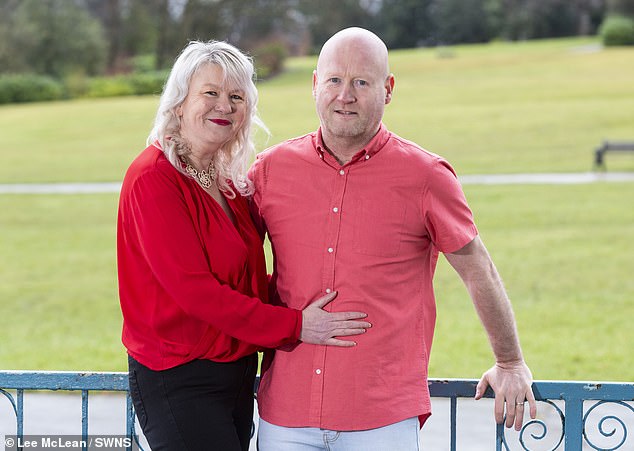 Lisa who used to eat ‘two days worth of food’ for dinner each night, has slashed her daily calories to just 1,200 a day. Pictured: Lisa and Paul

The competitive couple joined a Weight Watchers diet plan in November 2019 and would battle each other to see who lost the most weight each month.

Lisa used to eat ‘two days worth of food’ for dinner each night – especially loving a good lamb shank to treat herself before slashing her daily calories to just 1,200 a day.

Paul, who said he had ‘no self control’, was munching on six packs of quavers a day en route to a 5,000 calorie a day diet.

But since joining Weight Watchers the security supervisor has started eating healthily and cut down his daily intake to around 1,500 calories a day.

Paul said: ‘It’s been really great to be able to do this with Lisa, it’s been a competition of sorts but it’s also been brilliant to share this with her.’

The couple, who have been together for nine years and married for eight, said they can’t wait to start sharing memories and adventures in Spain once they’re allowed to fly.

Paul added: ‘Now we’re just waiting to be able to fly to Spain and enjoy our new home and our new figure.’

Paul (pictured, after the weight loss) who would eat almost 5,000 calories a day, revealed he had no ‘self-control’ and would eat six packs of quavers each day 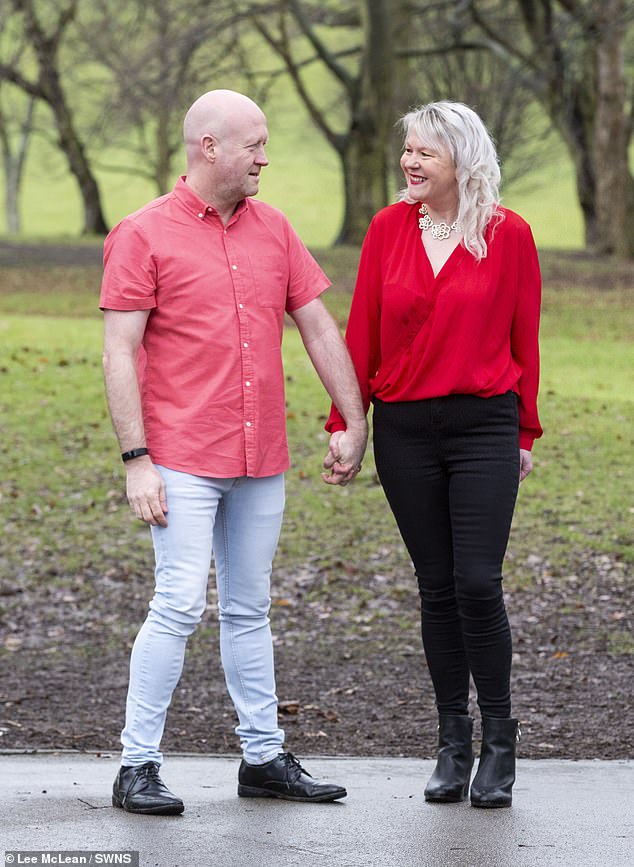