Days after Meghan Markle tearfully opened up about the pressures of becoming a mom while living in the spotlight, a parenting brand has come up with a way of reminding people that new mothers need just as much care and attention as their babies.

Inspired by the Duchess of Sussex‘ honest confession that she has ‘not been OK’ since welcoming her first born, Fridababy has unveiled a new ‘It’s a Mom’ balloon – a tongue-in-cheek take on the traditional decorations hospital visitors rush to buy when a baby arrives.

Chelsea Hirschhorn, 35, who a mom of three and the CEO of Fridababy, said that Meghan’s words about being vulnerable had ‘struck a chord with women worldwide’ and inspired her to create something to remind others to check in with women as they adjust to parenting. 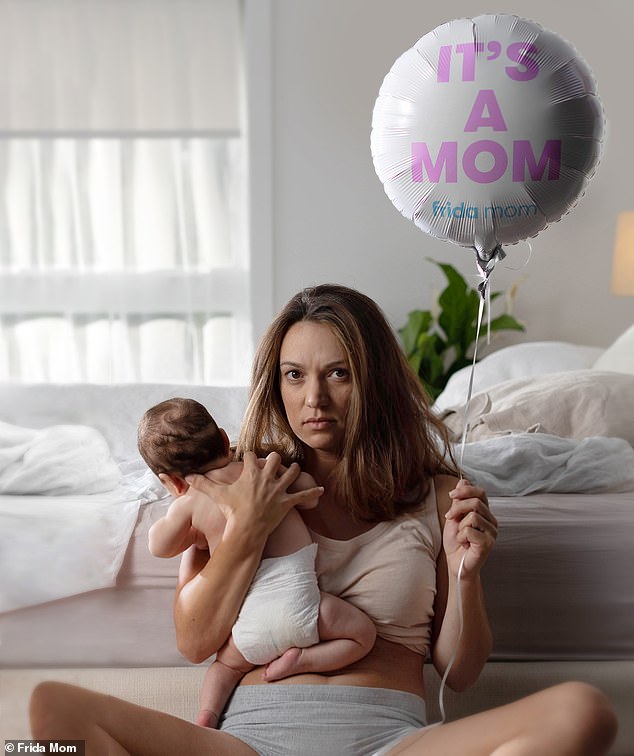 Don’t forget mom: Fridababy CEO was inspired by Meghan Markle’s revelation about ‘not being OK’ since welcoming Archie and created a balloon to remind people to check in on new moms 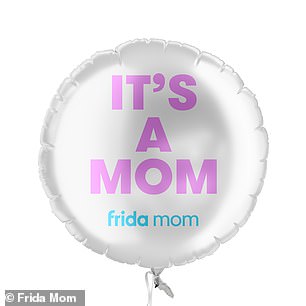 During a candid ITV documentary, former actress Meghan, 37, spoke about her experiences post-welcoming her son Archie Mountbatten-Windsor into the world in May.

‘Any woman, especially when they’re pregnant, you’re really vulnerable, and so that was made really challenging,’ Meghan told journalist Tom Bradby.

‘Thank you for asking [if I am OK]. Not many people have asked if I’m OK, but it’s a very real thing to be going through behind the scenes,’ she added.

Meghan also admitted that she has been struggling. 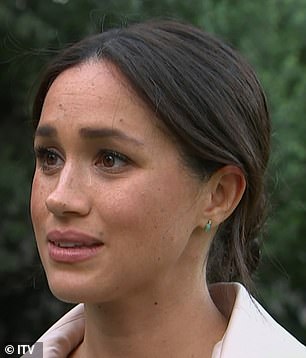 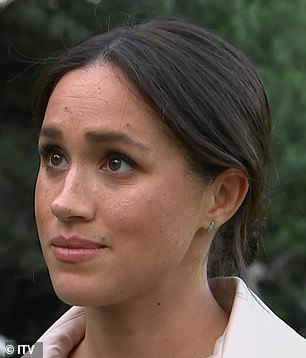 Support: Fridababy unveiled the new ‘It’s a Mom’ balloon in wake of Meghan’s emotional discussion of how she is coping with adapting to motherhood 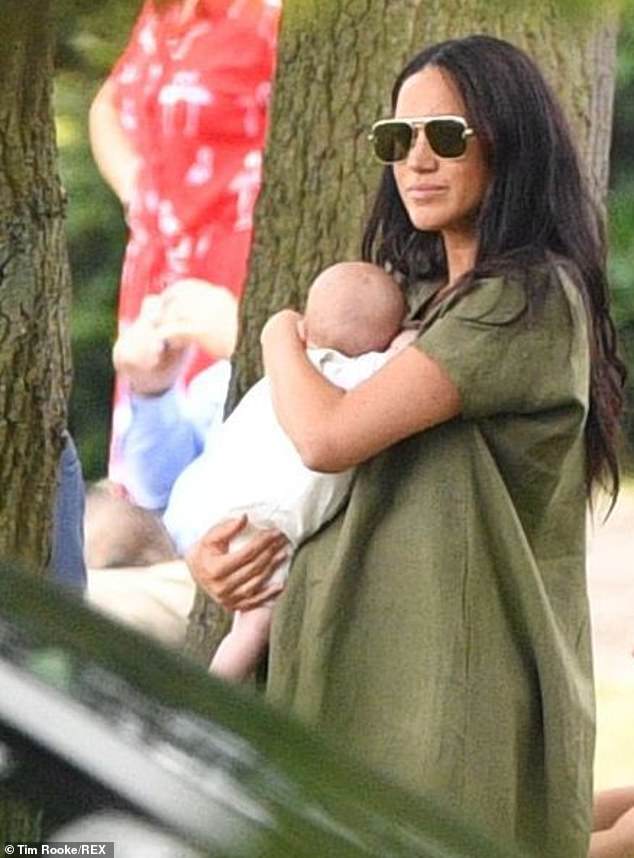 Spotlight: Meghan, 37, who is pictured in July, told ITV journalist Tom Bradbury that she has been struggling since welcoming her son thanks to her prominence in the spotlight

In a press release announcing the balloons, which will become available online on November 1, Florida-based CEO Chelsea said, ‘Meghan is not alone in how she’s feeling.’

Earlier this year, Chelsea opted to take out a full page ad in the New York Times as she penned an open letter to Meghan.

In the letter, published in March, 35-year-old Chelsea wrote about the realities of becoming a mom.

‘Bringing a new life into the world usually starts with your vagina, and the aftermath is a mess.

‘The bleeding and swelling will linger, peeing will burn, and sitting like your old self will feel like a herculean feat.’

Chelsea went on to note that even if Meghan gives birth via a C-section, there will be ‘a whole host of other issues to tend to’.

‘Either way, women are expected to just throw on their new mom hat – and while some of us have the chicest milliner on speed dial, I promise you still won’t feel like yourself,’ she warned. 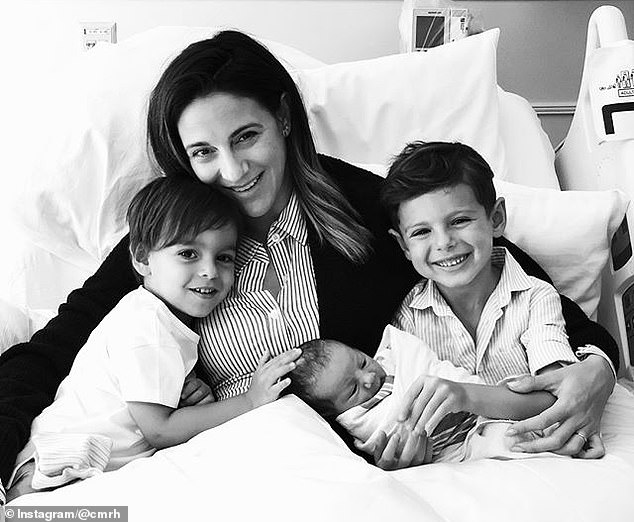 Sharing: Chelsea, pictured with her three children, is passionate about discussing the painful realities of postpartum life 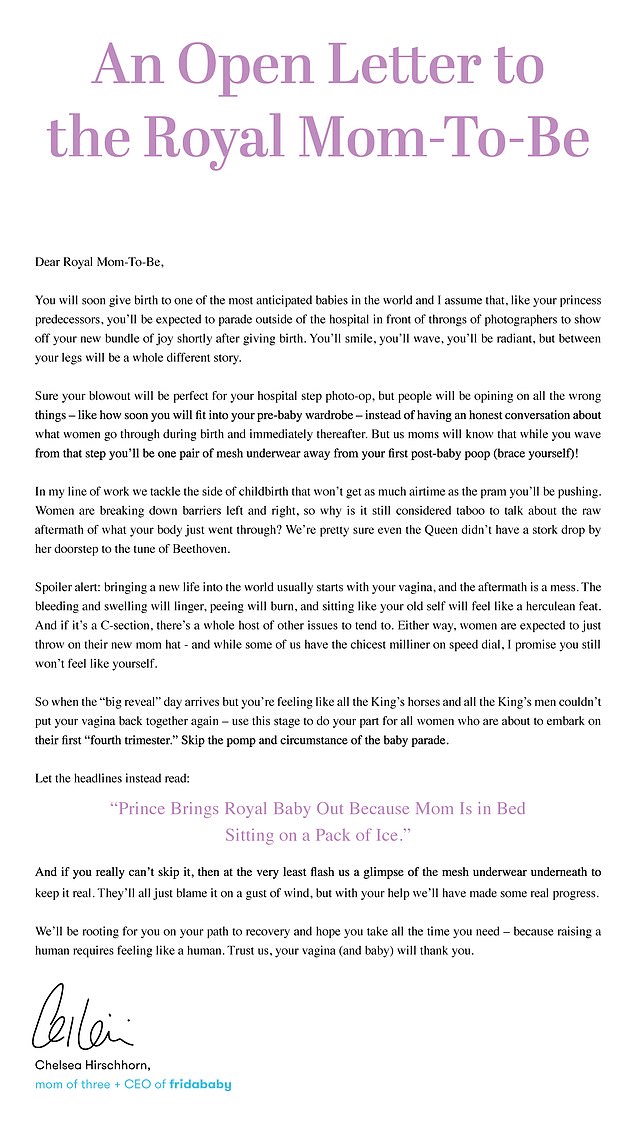 Open letter: In March, Chelsea penned a public plea to Meghan and also warned her about the stark realities of physically welcoming a baby

Chelsea urged Meghan to ‘keep it real’ instead of posting with a ‘perfect blow out for the hospital step photo-op’.

The businesswoman, whose company creates and sells ‘smart parenting tools’, from a ‘snotsucker’ for blocked-up babies to a ‘buttwasher’ for potty-training toddlers, routinely insists that more needs to be done to raise awareness about the realities of postpartum care and healing. 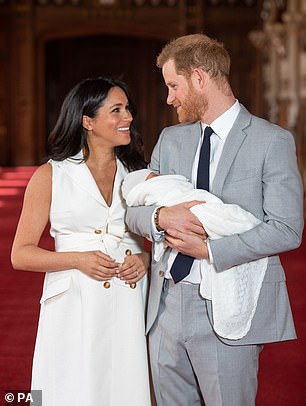 ‘Be real’: Fridababy CEO Chelsea publicly urged Meghan to ‘keep it real’ and talk about the realities of being a newmom

Revealing the ‘It’s a Mom’ balloons, Chelsea pointed to some eye-opening statistics.

Chelsea pointed out that women are not recommended to visit their doctors for three-six weeks after delivering their babies. Some 40 per cent do not go for a postpartum visit at all.

Last year, billboards for the ‘MomWasher’ – a tool to help women clean their vaginas after giving birth – were banned across the country for using the word ‘vagina’ in the campaign.

At the time, Chelsea spoke out about the ‘taboo’ surrounding ‘perineal healing’, urging women to break down barriers and be more open about the realities of birth and the impact that it has on the body, particularly the vagina.