We all know Christmas is set to be very different this year, with Covid-19 having put the Grinch out of a job.

But that doesn’t mean all your festive celebrations have to be confined to a screen.

Despite most of England facing tougher tier restrictions when it emerges from national lockdown on December 2, there are still a number of Christmas events going ahead across the country.

Here FEMAIL has rounded up a selection of festive attractions to help get you in the spirit – from Santa trains to Christmas markets. 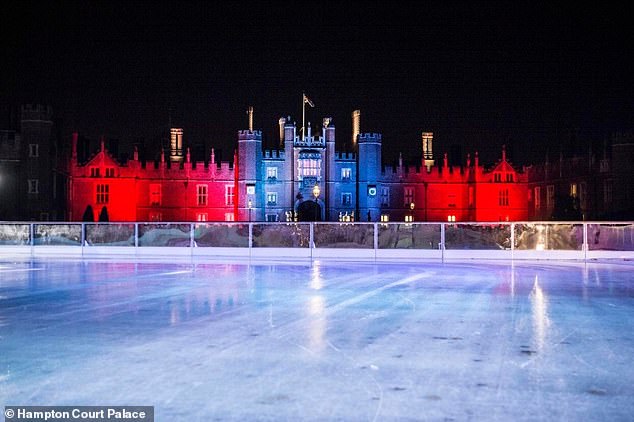 In the capital, outdoor ice skating rinks at Hampton Court Palace (pictured) and Queen’s House Greenwich are opening up from December 5

Many of the big seasonal rinks are not opening for 2020, with the Tower of London, Manchester, Birmingham, Yorkshire and Liverpool all postponing their ice festivals and attractions.

However, there are a number of rinks across the country that are welcoming visitors.

In the capital, outdoor rinks at Hampton Court Palace and Queen’s House Greenwich are opening up from December 5, while the year-round rink at Alexandra Palace has undergone a merry, Covid-secure makeover. In Kent you can visit Skate Tunbridge Wells.

Some rinks, including the Royal Pavilion Ice Rink in Brighton, are yet to announce their December schedules, so it’s worth checking the websites regularly to book tickets early when they do. 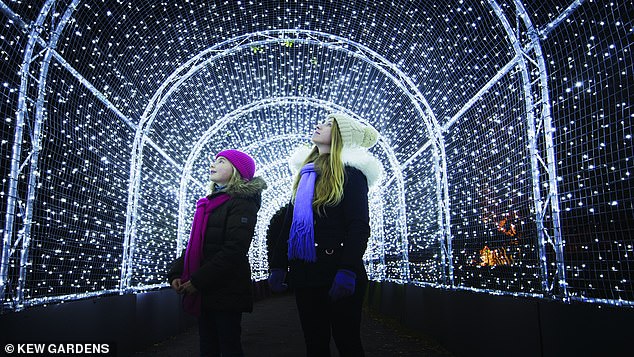 Returning for its eighth year, Kew Gardens in south west London is running its popular Christmas light festival, with its winter trail taking a new route this year, leading guests for the first time through the illuminated Rose Garden.

This year it’s running from December 4 until January 17. Organisers have scheduled extra time slots, are using an additional gate and revising the trail route to manage visitor flow in-line with Covid precautions. 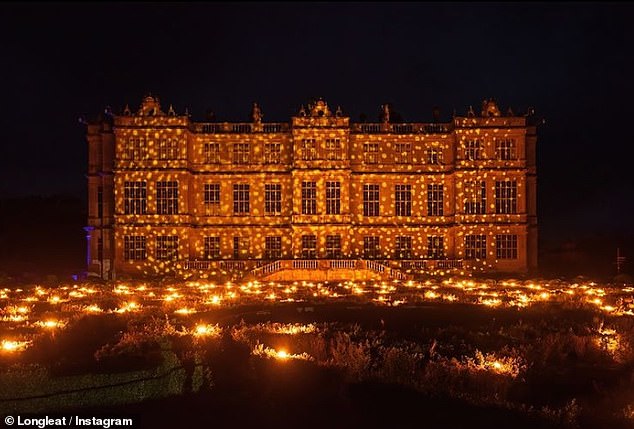 The Longleat Estate in the Wiltshire countryside will spring to gleaming life, with light installations across the park’s sprawling grounds in 17 zones

Having been closed during lockdown, Longleat will reopen on December 3, coinciding with the launch of its Land of Light event – with reduced capacity to make it Covid secure.

The Longleat Estate in the Wiltshire countryside will spring to gleaming life, with light installations across the park’s sprawling grounds in 17 zones.

These include a spring-themed display in the East Terrace, a laser display at Half Mile Lake and an ice-inspired winter maze with mirrors and LEDs at the Love Labyrinth, all with the spectacular backdrop of Longleat House. 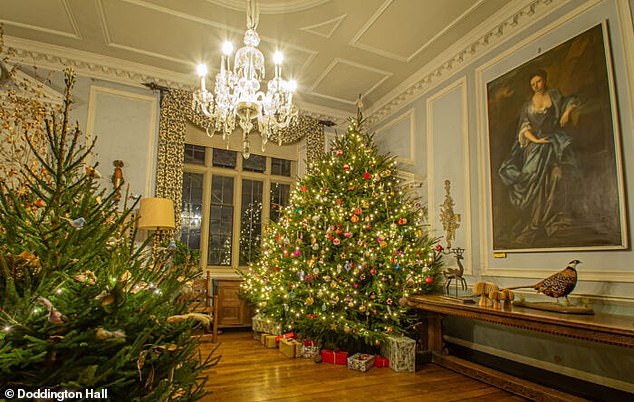 Doddington Hall will be given a festive makeover throughout to a ‘secret garden’ theme, inspired by its walled and wild gardens

The Lincolnshire stately home is going ahead with its Christmas event this year, which will run until December 23.

Doddington Hall will be given a festive makeover throughout to a ‘secret garden’ theme, inspired by its walled and wild gardens.

Each room will be adorned with handmade decorations using material that’s grown or produced on the estate. Booking is essential and entry is by pre-booked with timed tickets only to ensure everyone’s comfort and safety. 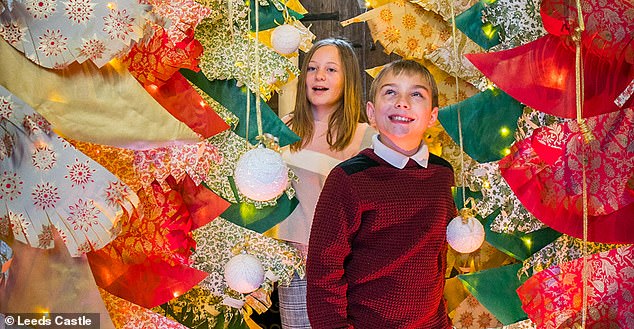 This year Leeds Castle in Kent is running its Christmas at the Castle event, putting on a display of alternative festive trees in its grounds

This year Leeds Castle in Kent is running its Christmas at the Castle event, putting on a display of alternative festive trees in its grounds.

Guests can wander down the woodland pathway through the Princess Alexandra Gardens and enjoy the enchanting wooden cabins featuring bespoke trees made from materials inspired by the castle’s state rooms.

Festive pantomimes going ahead this Christmas – oh yes they are!

My First Panto: Goldilocks and The Three Bears – The Garage, Norwich

Pantoland at the Palladium – London Palladium

The Panto That Nearly Never Was! – Theatr Clwyd, Mold

A Christmas Carol Horsham – The Capitol

While many large scale events such as Winter Wonderland in London’s Hyde Park are cancelled, there are still a number of local Christmas markets opening up next month.

Cardiff Christmas Market is making a return to the city centre and will remain open until December 23, while Darlington is also hosting its annual event, hosting a variety of stalls including unique crafts,  festive food, local produce and sweet treats.

You can enjoy a krug at the German Christmas Market at Meadow Croft garden centre in Essex, featuring traditional stalls.

Haddon Hall in Bakewell is holding its Mercatum – a winter artisan market – from December 11 until 14. It will be held largely outside, with socially distanced stalls across the hall grounds.

Haddon Hall in Bakewell is holding its Mercatum – a winter artisan market – from December 11 until 14. It will be held largely outside, with socially distanced stalls (pictured) across the hall grounds

The Christmas Emporium at Ravenwood Hall, near Bury St Edmunds is also going ahead, set in the hotel’s extensive gardens at Rougham between December 4-20. The event will be reminiscent of the German Christmas markets, with a variety of stalls offering traditional festive fayre from roasted chestnuts to mulled wine and unique gifts.

Between December 4-6, Trefresa Farm in north Cornwall is hosting a post-lockdown Christmas market with live music, pop-up food outlets and wreath making workshops – though make sure you book in advance.

Independent cinema Catford Mews in south east London is also hosting a community Christmas event, with a programme including a Christmas Fair, festive film screenings, a Comedy Club Christmas special and an end of year film quiz – with local vendors on hand to provide refreshments.

The Norfolk Christmas Fayre is also back for its third year, moving from Norwich Cathedral to the Norfolk Showground to provide more space for social distancing, with timed entry slots. The outdoor market supports local small businesses and producers, with everything from cheese to Christmas decorations, and there will street food available too.

Christmas wouldn’t be Christmas without carols, and while many choirs have embraced technology to provide virtual concerts, you can still get a dose of the real thing.

London’s Trafalgar Square’s St Martin-in-the-Fields is holding five live concerts for socially distanced audiences at the church, including A Christmas Celebration with the Academy of St Martin in the Fields on December 18.

Carol services are going ahead on December 13 and 14 at the Chapel of St Peter and St Paul, situated within the grounds of the Old Royal Naval College in Greenwich, with favourites including Handel’s Messiah. 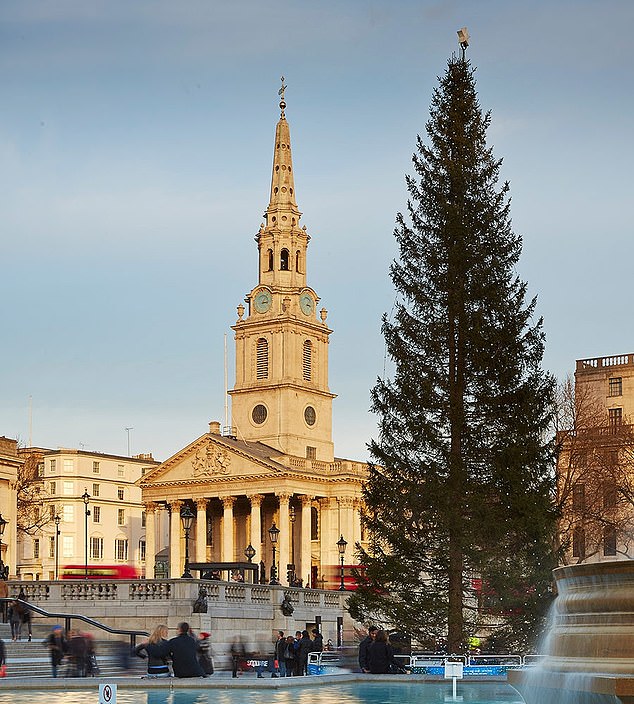 London’s Trafalgar Square’s St Martin-in-the-Fields is holding five live concerts for socially distanced audiences at the church, including A Christmas Celebration with the Academy of St Martin in the Fields on December 18

Southwark Cathedral in London Bridge is holding choir carol services from December 20-22. The services are free but you must register to attend. There’s also the Southwark Cathedral Choir Christmas Concert on December 18, with traditional carols performed by the Boys and Gentlemen of the Cathedral choir, interspersed with readings by screenwriter Dustin Lance Black and actor Timothy West.

Sadler’s Wells is also putting on a musical production of The Little Match Girl – based on Hans Christian Andersen’s classic story. 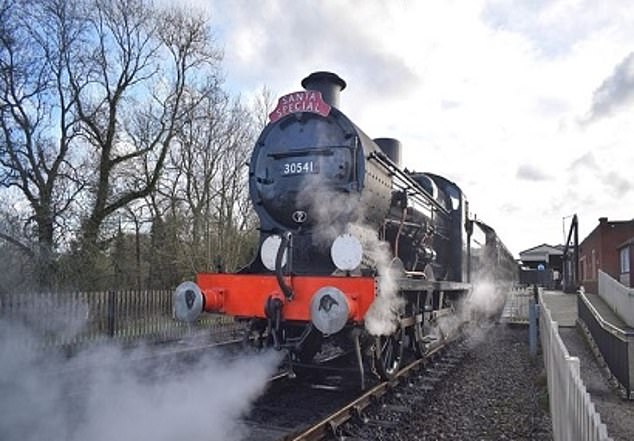 The Bluebell Railway, which runs between Sheffield Park in East Sussex and East Grinstead in West Sussex, will also be reopening and running services again from December 3

North Yorkshire Moors Railway has reimagined Santa Specials to keep the magic of Christmas alive for the young and young at heart this December, operating on weekends.

The heritage attraction and is also launching festive dining experiences aboard its classic Pullman steam train carriages – think Agatha Christie without the murder and mayhem.

From December 3, Severn Valley Railway in the West Midlands is also operating its Santa Steam Specials, with vintage steam trains departing the festively decorated Kidderminster Station for Arley – with presents for the kids.

The Bluebell Railway, which runs between Sheffield Park in East Sussex and East Grinstead in West Sussex, will also be reopening and running its Santa Specials again from December 3.

Visitors are met by mince pies and chocolate coins as they board their private compartments, before enjoying the trip through the countryside and meeting Santa in his parlour, concluding with a glass of punch on the platform. 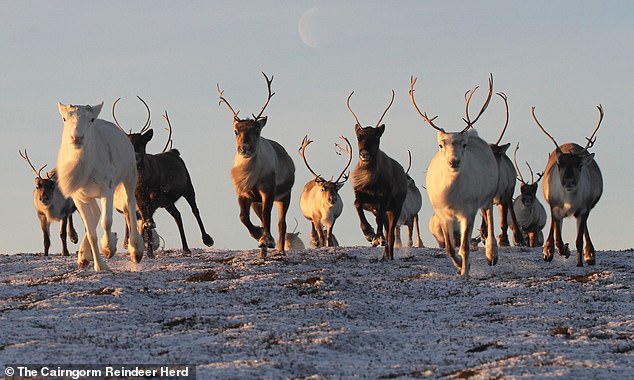 Britain’s only free-range reindeer, The Cairngorm Reindeer Herd, will also be staying at the Macdonald Aviemore Resort this December

Chessington World of Adventures is running its Winter’s Tail event on selected dates between December 5 and January 4. Kids can meet Father Christmas, team up with the cheeky Elves in the Magical Christmas Kitchen, and celebrate with The Gruffalo in the festive show.

Camel Creek Adventure Park in Cornwall is also planning to reopen on December 5 and hopes to offer a special 2020 Christmas Experience to get everyone in the festive spirit.

Santa, his elves and reindeer are due to fly into the magical winter wonderland at Macdonald Aviemore Resort in the Scottish Highlands from December 11, with families able to meet him in his grotto and receive an early present.

Britain’s only free-range reindeer, The Cairngorm Reindeer Herd, will also be staying at the resort this December, and children can enjoy elf sledge rides, a fire-pit sing along and the Panto School, where children can enjoy an immersive workshop with their favourite pantomime characters.

The four-star resort has already been transformed into a magical winter wonderland, with more than 50 Christmas trees, hundreds of fairy lights and thousands of meters of tinsel being hung up around the grounds.

While The Nutcracker has been cancelled, Storytime with Father Christmas is going ahead at the Royal Albert Hall this year.

In this all new, very special festive experience, the venue’s stunning porch has been transformed into an enchanting winter grotto.

Reading from festive favourite The Polar Express, Santa will take families on a joyful journey in this charming Christmas Storytime session, with each child taking home a gift at the end of the tale.

KidZania London is hosting its own winter wonderland with six activities to keep your little ones entertained, from ‘Elf School’ to the first KidZania pantomime.