Sun-dappled and blooming with beautiful flowers, while apples ripen on the fruit trees, Jenny Holden’s garden could hardly be more quintessentially English — or summery.

Yet, while many of us are clinging to hopes of a summer holiday abroad, there’s only one thing on Jenny’s mind: Christmas.

So much so that she’s bought the decorations and the mince pies are on order from the baker. Invites have been dispatched to ten guests with strict instructions that the dress code is festive jumpers — the more naff, the better — and she’s even earmarked a recipe for chocolate yule log.

That’s some preparation given Christmas is more than five months away. But this isn’t Jenny being eager to celebrate Christmas 2021. Absolutely not. This is the much-delayed Christmas that never was, 2020. 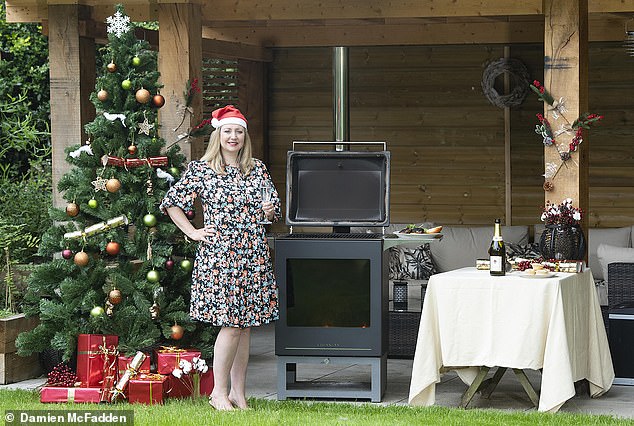 Many Brits have jumped on the ‘Middlemas’ bandwagon to make up for lost time, including Jenny Holden, 46, (pictured), who has invited ten guests to her celebrations

‘Like most people found, last Christmas was a non-event as we couldn’t celebrate with family and friends due to Covid restrictions, so I figured we ought to have a belated celebration this month to get everyone together,’ says Jenny, 46, a company director (choruscomms.co.uk) who lives in Lichfield, Staffordshire, with her husband and ten-year-old twin sons.

‘We could have hosted a festive party indoors, but it’s more fun to celebrate Christmas in the garden and make the most of the summer, too. I know it sounds ridiculous, but it puts a smile on people’s faces.’

Christmas lunch will include barbecued homemade turkey and stuffing burgers (they could have had a whole frozen bird, but everyone voted for the burgers) and pigs in blankets cooked alongside, and the guests will belt out carols by the artificial tree, which she’ll put up next to the pergola (lest it should rain).

Although Santa won’t be popping down the chimney, there will be gifts and Jenny has an outdoor log burner to add to the mash-up.

Though it may sound like the current heatwave has gone to Jenny’s head, she’s not the only one.

Dubbed ‘Middlemas’, Christmas in the height of summer has long been popular with military families separated by tours of duty for large parts of the year, and as a marketing ploy for retailers to launch their seasonal food and wares ahead of the winter.

In Australia, celebrating ‘yulefest’ in July is common as it is winter in the southern hemisphere, so Christmas can be toasted with cosy drinks by the fire instead of barbecues on the beach.

Now, swathes of Britons denied their usual festivities last December have emerged from lockdown ready to celebrate, and have jumped on the Middlemas bandwagon to make up for lost time.

In response, Aldi has been running a ‘Junemas’ promotion, putting the likes of Christmas pud and mince pies back on sale. Meanwhile, Pret A Manger’s festive turkey and stuffing sandwich hit the shelves on July 6, five months earlier than usual, due to demand — and who else launched it but Slade frontman Noddy Holder, of Merry Xmas Everybody fame. 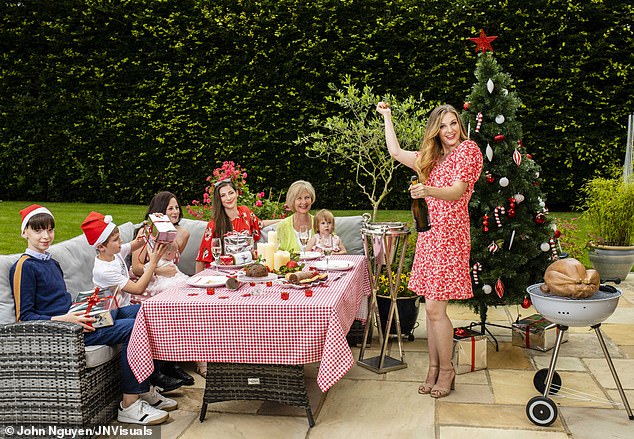 Francesca Kemp, 28, (pictured) who lives in Watford, is preparing a family Christmas with 27 of her relatives in the garden of her aunt’s Buckinghamshire home

Though it may seem a little premature, life’s been anything but normal over the past 18 months, so why not throw Christmas celebrations into the middle of summer to continue the theme? That was Jenny’s rationale.

‘I actually hosted a Middlemas party three years ago because everyone’s lives had been so frantic the December before that we hadn’t caught up with friends,’ she recalls.

‘I came up with the idea of getting together for Christmas that summer before everyone went off on holiday and when we weren’t all so fraught.

‘The weather was hot and sunny but everyone rocked up in Christmas jumpers and, far from thinking I was mad, our friends loved it.

‘So when last Christmas passed most people by, I decided that if restrictions were lifted by this summer, I’d do it again. When the new rules became clearer, I asked our friends if they’d take part in my hare-brained idea, set the date, sent the invites and started planning.’

Joining Jenny and her husband at their July Christmas celebration are five other couples, but all the kids are booked in for sleepovers.

‘I do feel a bit guilty about that, but we’ve all spent so much time with our little ones during the pandemic,’ says Jenny. ‘Plus, Father Christmas was exempt from travel restrictions last December so it was still magical for the children. 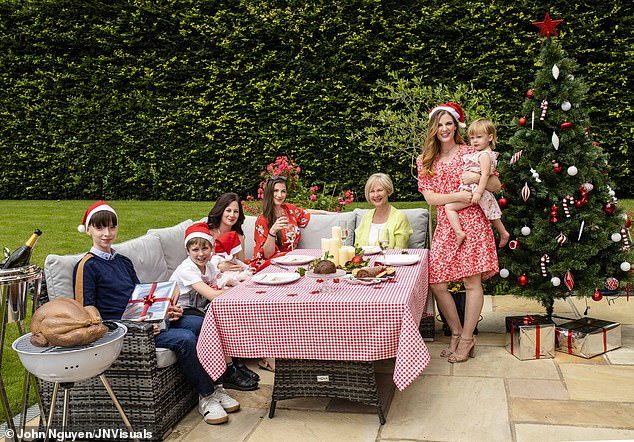 ‘This will be Christmas Day grown-up style, with festive cocktails on arrival, the garden table laid with wine and champagne glasses, fairy lights, crackers and a super-summery pavlova with strawberries and cream alongside the yule log.

‘We could have had a standard barbecue, but making it Christmassy means it will be special and, my goodness, we all need things to celebrate after what we’ve been through.’

It’s a point supported by chartered psychologist Dr Michele McDowell, who reminds us that Christmas and other traditional celebrations hold great psychological value.

‘Nobody would argue with the fact that the past 18 months have been stressful and filled with anxiety-provoking uncertainty,’ she says.

‘The greatest antidote for such anxiety is the predictability of traditions such as Christmas, which foster warm memories and a sense of connectedness and belonging. These feelings help us relax and encourage the release of feel-good hormones, such as dopamine and serotonin, which increase our sense of wellness and happiness.

‘Many people did not have the Christmas they hoped for last year and delayed it, but for others, celebrating Christmas in July may also be linked to the desire to live in the now. Research has indicated that greater happiness is found by grabbing joy in this very moment.’ 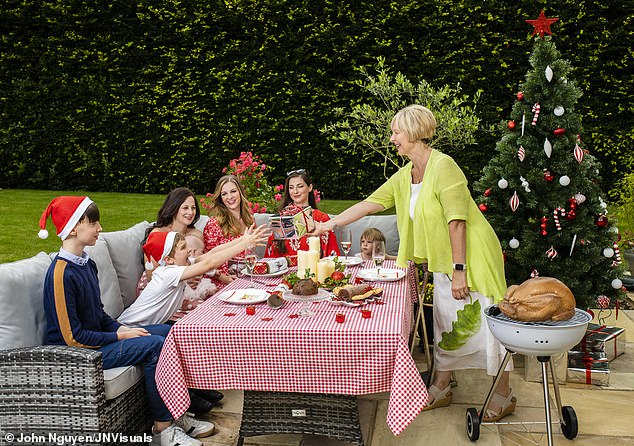 Like Jenny, maternity nurse Francesca Kemp is preparing for a family Christmas with 27 of her relatives in the garden of her aunt’s Buckinghamshire home this month.

‘My aunt is pulling out all the stops to make it a special family Christmas, and will be laying a table in the garden with beautiful cutlery, crockery, napkins and decorations, just as she would if we were dining indoors in December,’ says Francesca, 28, who lives in Watford with her partner and their three young children.

‘She suggested the idea when last Christmas was cancelled, and we all thought it would be a fantastic thing to do. So, while she put the colossal turkey in her freezer, we all put the summer date in our diaries in the hope restrictions would be lifted.

‘I’ve no idea how, but she’s going to barbecue the turkey and we’ll have a chocolate bomb for dessert, which has a hard chocolate exterior and a gooey concoction inside. Made using a family recipe passed down through generations, it’s become a tradition instead of a Christmas pudding.’

Being such a large family, in normal times Christmas is a rare chance for Francesca and her children, parents, siblings, aunts, uncles and cousins to be together. So their summer celebration is much anticipated. 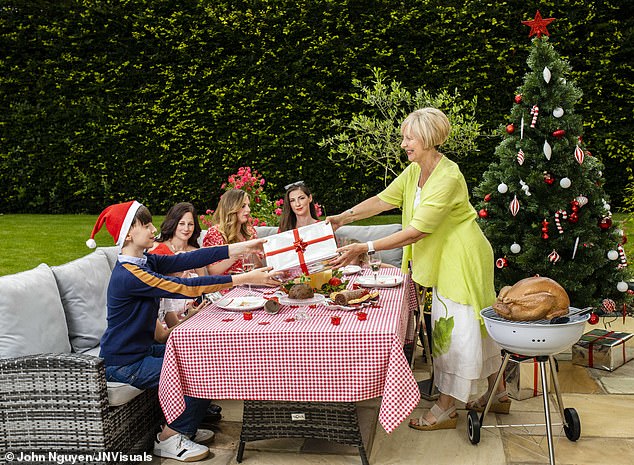 ‘The last time we were all together was January 2020, so Christmas in July will be special,’ she adds. ‘We’re even doing a secret Santa with gifts costing no more than £10.’

Although Santa won’t be calling in, as he’s recovering from last year’s calendar Christmas, there’s one present Francesca’s family are ho-ho-hoping for above all else.

‘We want my grandmother to join us, as she turned 90 in March and we couldn’t have the party we’d planned due to Covid,’ says Francesca. ‘She’s in hospital after a fall and we have to be realistic that we don’t know how many more Christmases she’ll be here for.

‘Although she finds it noisy when we’re together, she’ll be thrilled to join us. She is queen of our family so we’ll seat her at the head of the table and pour her a glass of her favourite festive tipple, sherry.’

To add an extra splash to their summer Christmas, a neighbour has offered use of his outdoor swimming pool, and they’ve hired a bouncy castle for the children.

Francesca adds: ‘We’ll all wear silly hats, read jokes from our crackers and play games, and if the weather’s cooler, my Christmas-mad dad will insist everyone wears a festive jumper. He puts so many lights on his house at Christmas it’s probably visible from space. 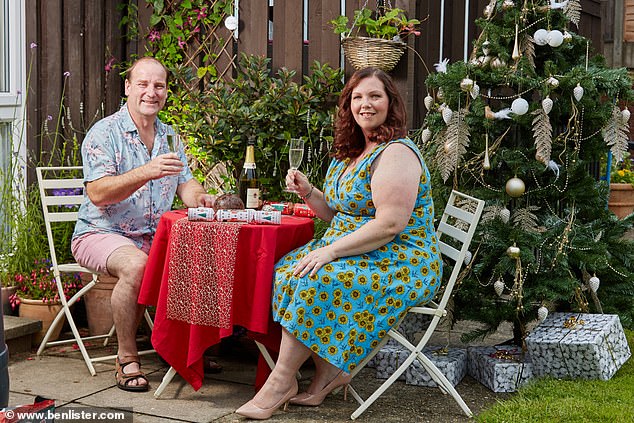 Jane Ramsell, 44, and her partner Nigel, 47, (pictured) are still basking in the festive glow of their own Christmas-in-summer celebrations a few weeks ago

‘The children are excited as they haven’t seen their cousins for so long, and I don’t mind that my jobs for the day are children’s entertainer and chief clearer-upper. We’re all pitching in to help make it a Christmas to remember.’

Marketing and events adviser Jane Ramsell, 44, is still basking in the festive glow of her own Christmas-in-summer celebration a few weeks ago, with her partner Nigel, 47, a stand-up comedian, and her parents Carol and Jeff.

‘My friends say I’m a bit “extra” when it comes to Christmas as I love it so much, and they weren’t surprised when I said we were having a summer celebration in lieu of last year’s real thing,’ says Jane, who lives in Romford.

‘London was in Tier 4 last December, and my mum and dad are 200 miles away, so we couldn’t even exchange presents outdoors. Nor did I get to sing carols with my choir in Trafalgar Square, nor on the quayside in Dartmouth near my parents’ home.

‘Instead, Nigel and I spent Christmas alone at home with Humphrey, our cat, and ate the goose we’d bought for New Year’s Eve. Mum put the turkey she’d bought for the four of us in the deep freeze, hoping we’d have Christmas at another date.’

And their recent summer celebration was no token gesture. 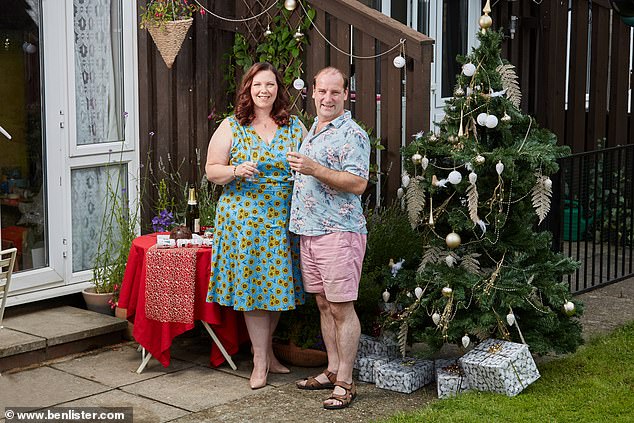 Jane and Nigel (pictured), who claim the celebration wasn’t as stressful as Christmas in December, also had Boxing Day

Jane and Nigel loaded up the car with gifts and a homemade Christmas pudding, then headed down to her parents’ home in Devon the night before, with Chris Rea’s Driving Home For Christmas — what else? — blasting out, and the summer sky still light until late.

Meanwhile, her mum had put up the tree and was busy parboiling potatoes, peeling sprouts and warming mulled wine on the hob, ready for their arrival.

Though it was warm and sunny outside with no threat of a white Christmas, the big day itself was as it would be in December. After opening presents, Jane and Nigel took over in the kitchen to cook the turkey, and the afternoon was filled with champagne, board games, Michael Buble’s crooning and Quality Street.

And they didn’t stop at Christmas Day: ‘We had Boxing Day, too! To blow the cobwebs away we went on a boat tour of the cruise ships in Torbay in the afternoon, before heading back for a turkey pie that Nigel made with the leftovers, and a ham Mum had baked.

‘What’s interesting is it wasn’t as stressful as Christmas in December because there was no frantic run-up of shopping, finishing work and squeezing in get-togethers.

‘It was such a memorable experience that felt like a proper Christmas. The only reminders it wasn’t December 25 were the warm weather, Wimbledon on the TV, and the green gardens filled with bees zooming around the flowers in bloom.’