Disney Channel made history — and delighted fans — by portraying its first-ever gay teen couple on the series finale of the show Andi Mack.

The final episode of the series aired on Friday, concluding with one the main characters, 13-year-old Cyrus Goodman, holding hands and coupling up with fellow middle schooler TJ.

The groundbreaking moment was a major first for Disney Channel, and fans — who’d previously watched Cyrus’s coming-out play out on the show — are both touched and thrilled with the ending. 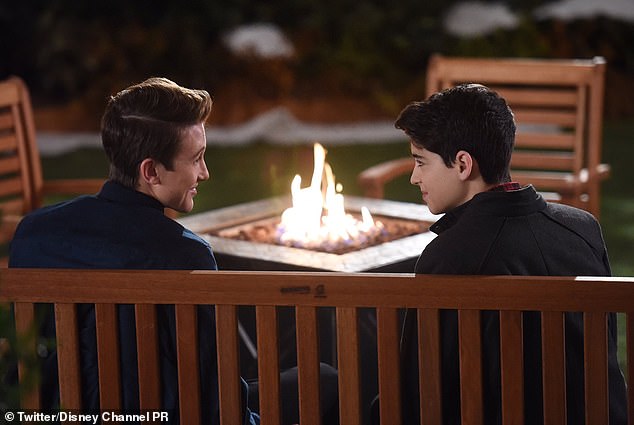 Groundbreaking: Disney Channel made history on Friday by portraying its first-ever gay teen couple on the series finale of the show Andi Mack 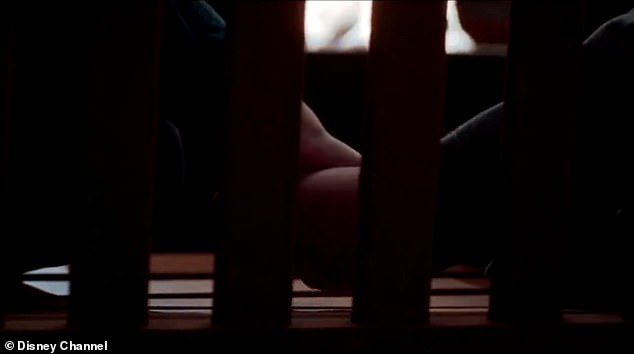 A big deal! In the finale, Cyrus gets into a relationship with TJ, with the two sweetly holding hands

The show, which ran for three seasons and was a top-rated series for the six to 14 demographic, follows the lives of middle schooler Andi Mack and her friends and family.

The show has been considered groundbreaking for some time — particularly since an episode aired in October 2017, in which one of Andi’s tween friends comes out as gay.

Cyrus (played by real-life 17-year-old Joshua Rush), admits to Andy and their friend Buffy that he has a crush on another boy, Andi’s boyfriend Jonah.

The moment made headlines, with Cyrus being the first-ever Disney Channel character to come out on a show.

Now in the finale, Cyrus brought another ‘first’ to the family-friendly network: He and his friend TJ (played by Luke Mullen, who is also 17 in real life) start dating. 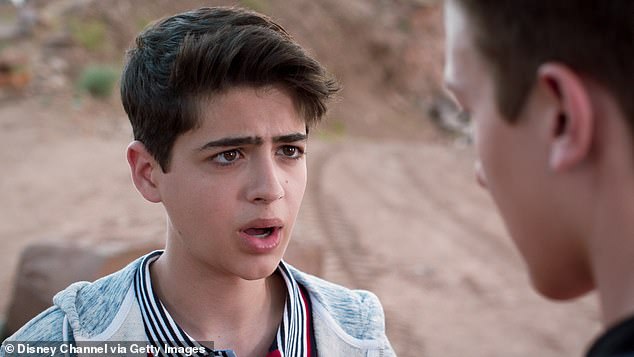 Gay: The show first touched on the subject when Cyrus came out to his friends 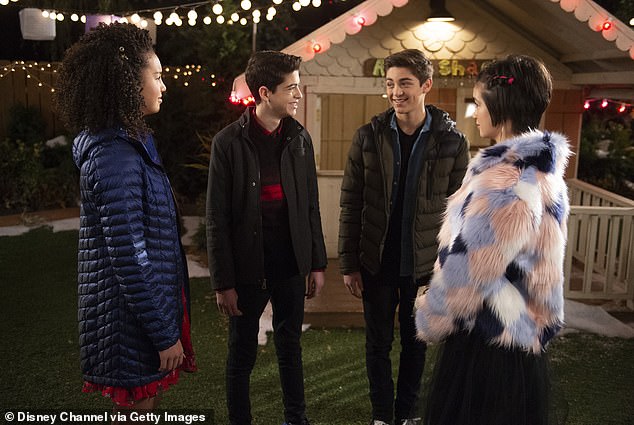 Inclusive: The show has been hailed for sensitively portraying teen sexuality 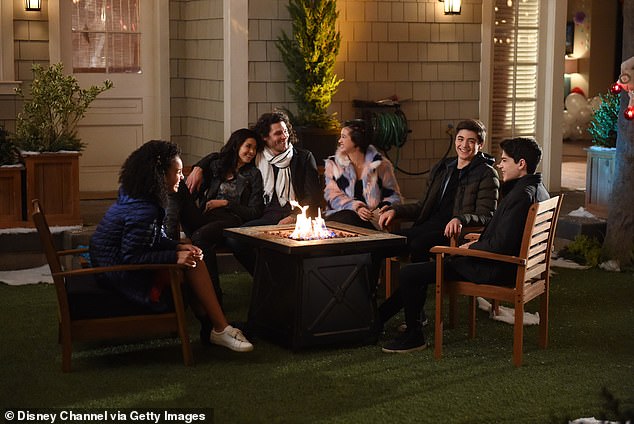 Feelings: The show’s creator, Terri Minsky, said of the hand-holding: ‘I think that first physical contact with somebody is so intense’

The romantic connection is incredibly chaste. The boys spend a scene singing Lady Gag’s Born This Way together before tip-toeing around a conversation about being a couple.

They hold hands — but that’s it.

And while the characters may not have explicitly spelled out that they’re officially dating, the cast and the creator of the show did.

‘Guys, gals, and nb pals, i can now tell you: tyrus endgame canon and confirmed,’ wrote star Joshua, referring to the couple portmanteau for TJ and Cyrus.

‘Honored to be a part of such a groundbreaking show,’ he added. ‘I hope my character can inspire people to be proud of who they are and love who they love.’

Here for it: Joshua Rush, who plays Cyrus, confirmed the romance for fans on Twitter

Making a difference: Luke also wrote that he was honored to be a part of the show

Fans have been thrilled, too, tweeting all-caps reactions and GIFs to express their excitement.

Terri Minsky, who created the show and is also the writer behind Lizzie McGuire and The Geena Davis Show, spoke to Paste magazine about the decisions that went into making the finale.

‘They’re still in middle school, you know,’ she said of making the choice to have them just hold hands. ‘And I know that people do things in middle school, but I guess I feel like it’s so. much. for, you know, the captain of the basketball team, to hold hands with a boy in the middle of a party.

‘I feel like a kiss, in a way, would have not been realistic to these characters. A lot of that story, a lot of that journey between Cyrus and TJ was subtext, and I think that whatever they were saying to each other, they weren’t actually saying in words.

‘And even that final conversation isn’t explicit. I love that they have that moment reaching for each other and holding hands, in my mind, in the world that we live in, in the story of this relationship, that is a lot. 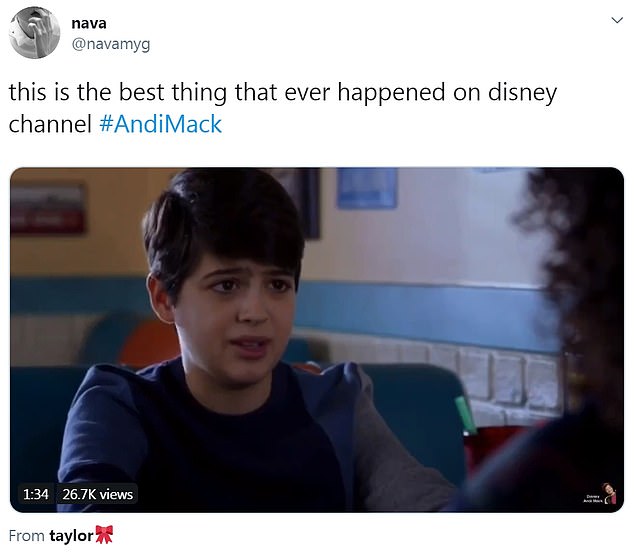 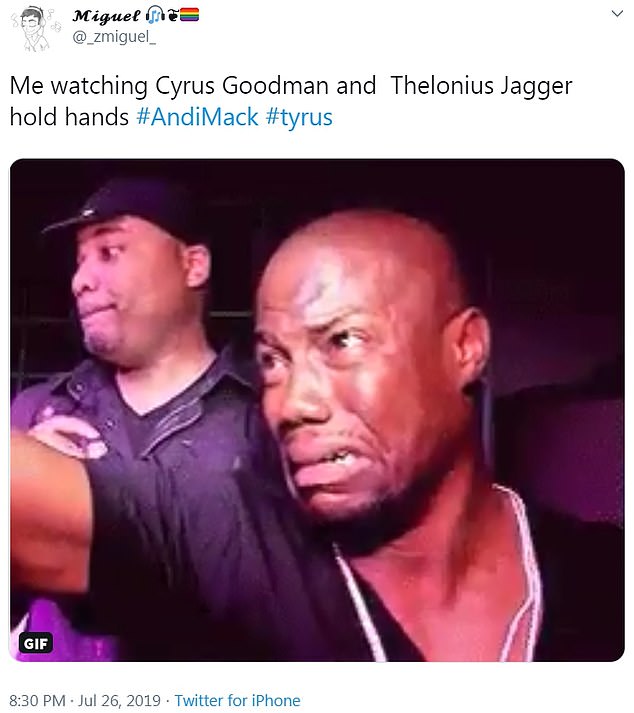 Yas! Fans were thrilled with the relationship and tweeted about the ending

‘I think that first physical contact with somebody is so intense,’ she went on. ‘The feeling of their hand and your hand intertwined, how unusual and connected and intense that is.

‘I just felt like this was the story of these characters, that they finally understood what they were saying to each other, and it wasn’t like they had to wonder, is he saying this? or is he thinking this?

‘In terms of the story, it didn’t need a kiss. Adding a kiss would have been doing it just to do it, to be first, and I didn’t want that. I would love if we were going to go on and have another season or another story, I would love to have the first LGBTQ kiss on Disney.’