A cleaner has sparked a debate online after creating patterns on her client’s carpet by running a hoover across the floor in opposite directions.

Kaleigh Johnson, from Oxford, took to an online forum to admit she loved drawing triangle shapes on her employers’ floors when she cleaned their houses.

And it appears she’s not alone, with many other cleaning enthusiasts admitting that they enjoyed the strange hobby.

Sharing a picture in Cleaning Tips and Tricks on Facebook, Kaleigh showed that her lines were shaped like triangles on her employer’s carpet. 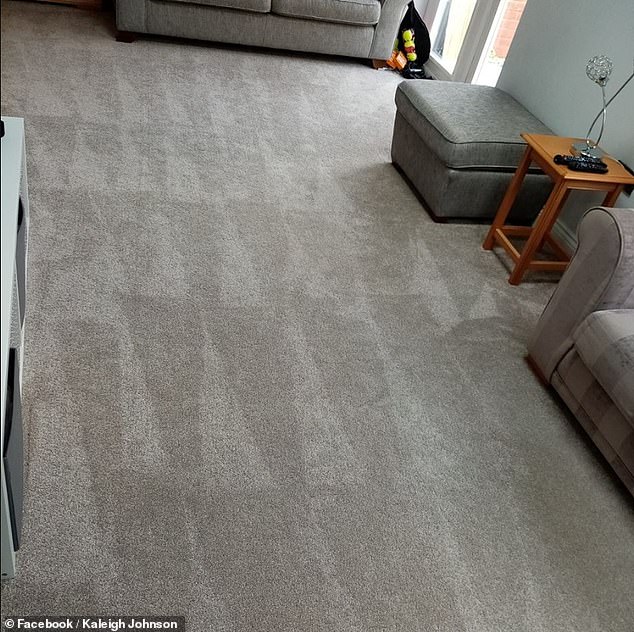 Kaleigh Johnson, a cleaner from Oxford showed the triangle-shaped lines she liked to draw on her customers’ carpet

People on Facebook had divided opinions about the lines, with some saying they hated them, and other saying they did it too

‘Don’t know about you, but this give me so much satisfaction,’ she wrote, ‘this is a client’s living room I did today,’ she added.

‘This was done by a Hetty Hoover, makes it and shows clients you’ve actually hoovered,’ she later added in a comment.

And some members of the group admitted they loved the idea, with one writing: ‘Love this. My family think I’m odd but this makes me happy’.

‘I do this on my rugs too then walk around them, husband thinks I’m nuts,’ another joked.

‘I vacuum frequently just to have lines I loooooove it,’ said a fan.

‘I make a “racetrack” with the vac for one of my clients with a little boy,’ another cleaner said.

‘I have a client who likes me making a sun in his man cave rug haha,’ one wrote.

‘I want those Hoover lines,’ said one.

However, the trend of lined carpet was not to the taste of everybody. Some users said they hated them and preferred their carpets smooth.

I don’t have carpets but if I did I would want to do this… Do you just vacuum diagonally one way then again the other to make the triangles,’ one asked.

‘This gives me anxiety,’ one complained.

‘My customers would go mad if i even attempted to do it lol,’ said a cleaner.

‘This would drive me nuts,’ wrote another.

‘I can’t stand lines and smooth mind over at the end to get them out. Not that hard and looks so much better,’ said another.

Members of the cleaning tip group were split over the issue as some said they consciously hoover over lines, while others said they purposefully drew some

‘I have just been carpet shopping and salesman says this particular one is “like marmite, you either love it or hate it.” one observed.

‘I don’t have OCD but those patterns to me would look like clutter on the floor lol .although having said that it sort of does look okish but my eyes just see clutter lol again sorry no offence meant at all . footprints lol everyone would have to fly over it lol,’ one person said.

‘I’d be a bit p***** if someone did that to my carpet… I’d wonder how long it took them too if I was paying by the hour. I hope they liked it though,’ said one.

‘As long as my rugs are vacuumed I don’t care if it’s done in circles lmao,’ said a person who did not care about the debate.

While some said they did the lines too, other pointed out that while it wasn’t their style, they wouldn’t judge those who liked it

‘Am I the only one that thinks these look awful? I hate seeing lines in lawns also,’ one wrote.

‘That would drive me insane. To each their own I guess,’ said another.

‘I don’t want to pay a fortune for a carpet and find it covered in triangles. Want it all to look the same thanks,’ one pointed out.

Earlier this week, another mother divided Facebook when she used Christmas wrapping paper to decorate her living-room wall.

Keeley Parker, from Bristol, found the perfect way to transform her lounge on a budget, adding some festive cheer with her handy hack. 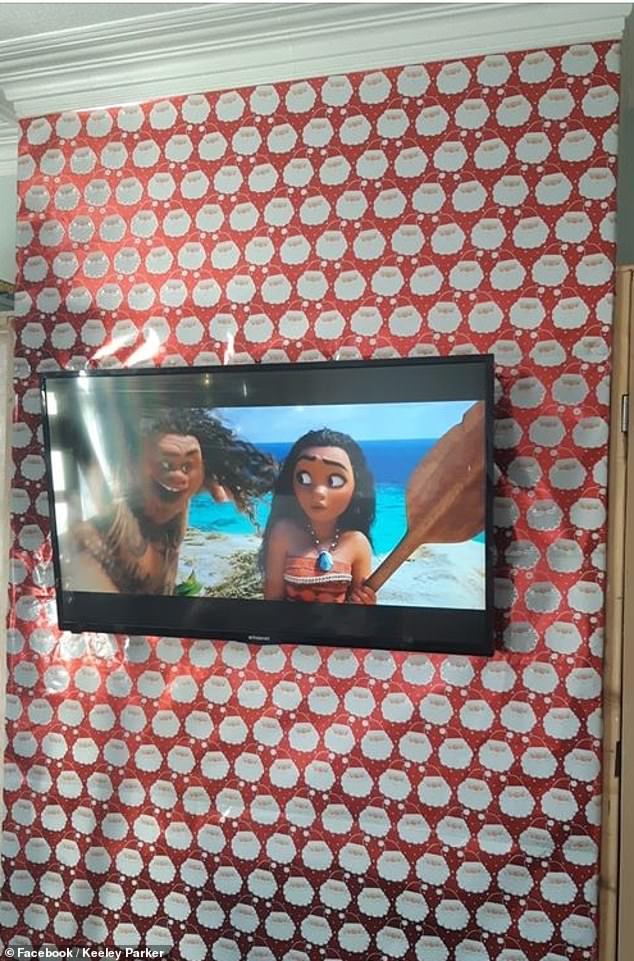 Keeley Parker, from Bristol, has revealed she’s used Christmas wrapping paper (pictured) to decorate her living room wall until she can afford her dream wallpaper following the festive period

She went on to say she’ll be keeping it up until she can afford her desired wallpaper – and many members were quick to praise her innovative idea.

‘I might do this myself. My kids would love it,’ enthused one, while a second penned: ‘Oh, I love! Fab idea!! Brilliant wee mummy.’

In the post, which has since received over 12, 000 likes, Keeley explained: ‘Decorating my house and well I can’t afford the wallpaper I want right now.’

‘Costco £11 and I think it’s like 36m long wrapping paper, will be my wallpaper until January when I can buy the one I want. Its looks so good! Looks so Christmassy’ (sic).