A bear who ransacked a couple’s kitchen after breaking into their log cabin did ‘no damage’ to the house, but stole enough snacks for nine people.

Michelle Eberhart, from Indiana, decided to go on a trip to Gatlinburg, Tennessee to spend lockdown in a rented cabin with her husband and their friends, but she received an unexpected guest when a black bear managed to break in.

Appearing on This Morning, Michelle told that while the bear broke the lock to come in, he was a ‘gracious house guest’ who ‘didn’t scratch anything up’ – but did leave a ‘chocolaty hand print’ after ransacking their kitchen.

She said the animal ate enough snacks for nine people in one sitting, including 5lbs  of chocolate, 2lbs of gummy sweets, two large bags of chips, beer and Diet Coke. 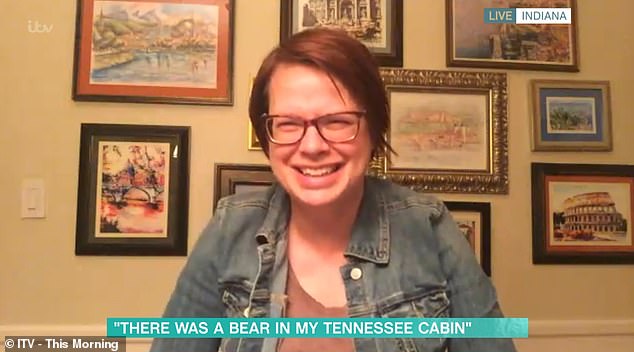 Appearing on This Morning, Michelle Eberhart (pictured), from Indiana decided to go on a trip to Gatlinburg, Tennessee to spend lock-down in a rented cabin with her husband and their friends

‘It broke the lock on the door’, said Michelle, ‘It busted the door frame, it was kind of a gracious house guest, he didn’t tear anything up.

‘He didn’t scratch anything up he left a really chocolaty hand print. He let all the furniture undisturbed.’

‘This was snacks for nine people two beers, two diet cokes two bags of chips, a big tub of pretzels, it was unreal.’ 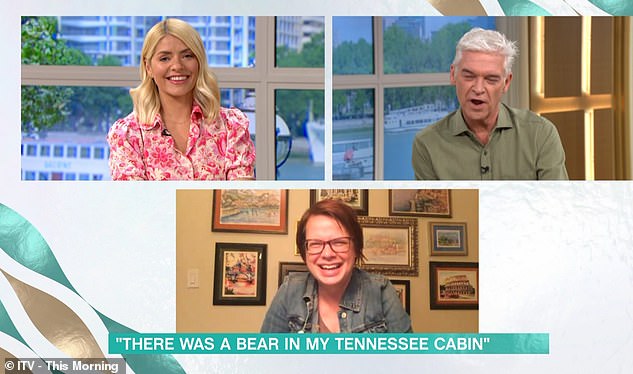 In the video, Michelle can be heard speaking to her friend, also called Michelle, who she called for help while both their husbands were away playing golf.

Clearly distressed, she says: ‘He’s sitting at the back door, Michelle, trying to get out. He’s trying to open the door, he’s ransacked everything.

‘There’s one outside they’re staring at each other. Michelle it saw me, it’s looking right at me.’

Appearing on the show, Michelle told that it had been a ‘quiet morning’ and the pair were terrified after spotting the animal. 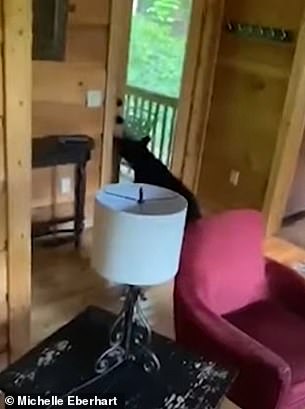 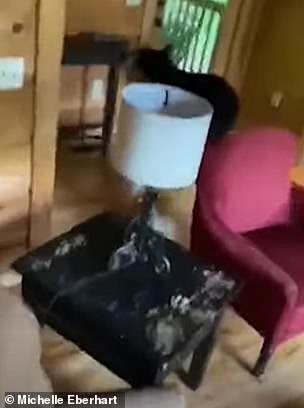 The animal ate enough snacks for nine people in one sitting, including five pounds of chocolate, two pounds of gummy sweets, two large bags of crisps, beer and diet coke

‘Michelle had a straight view of the door’, she said. ‘And we were just talking, we hadn’t seen each other since October. We had other friends arriving later, so it was a really quiet morning.

‘She just had this look of horror on her face, she was pointing. I didn’t have a direct line of sight and then I panicked.

‘I jumped over the couch and I was yelling it was ridiculous, I was stomping trying to scare it away.’

Once the bears left, Michelle and her husband called the owner of the cabin who called the police, who were able to fix the doors and remove the bear

Boots Cyber Monday 2020: Here are the 10 beauty deals worth adding to your basket