A father has re-written Snow White after being concerned that the original taught his daughter her ‘self-worth revolves around beauty’.

Author Stephan Kalinski, 38, of Berlin, took it upon himself to rework the classic tale after revisiting them at bedtime with his daughter Lena, now five.

With some clever tweaks to the plot, Mr Kalinski transformed Snow White from helpless princess to empowered heroine.

And there is no ‘happily ever after’ with a handsome prince, instead the pair end the book as friends with plans to travel the world. 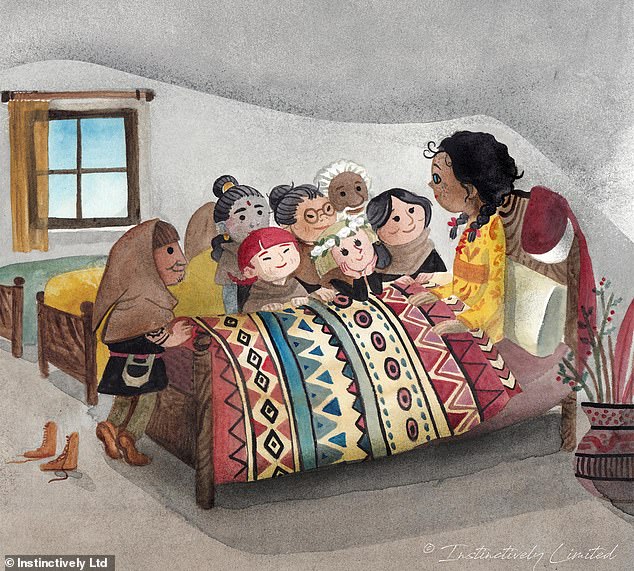 A father has re-written Snow White after being concerned that the original taught his daughter her ‘self-worth revolves around beauty’. The heroine still meets the Seven Dwarfs (pictured) but each represent a different ethnicity and both men are women are represented

He said: ‘While reading Snow White to my daughter, she was about three-and-a-half, at the time and loved this story.

‘Something really struck me. Snow White is about good vs. evil but essentially, I am teaching her that it is important for you (as a girl) to be pretty and that your self-worth revolves around beauty, doing housework and that she should wait to be saved. 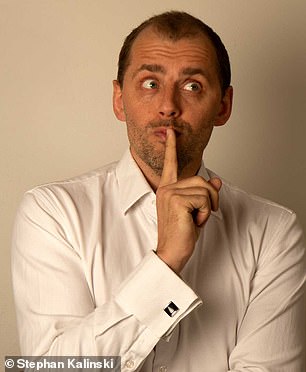 Stephan Kalinski, 38, pictured, of Berlin, took it upon himself to rework the classic tale

‘That felt really wrong and I do not want her to grow up believing that what is important in her life is how she looks. I therefore started changing the word “fairest” to “brave” while reading.’

Mr Kalinski then started to change the print so that his daughter could follow the story with him.

He continued: ‘Fairy tales are such a powerful messenger for the little ones.

‘I see my kids sitting and staring at books and the images inside of them and you can feel them soaking up the information and believing every word written in them. That is so incredibly powerful, especially at such a young age.’

In Mr Kalinski’s version, published this week, brave Snow White conquers her fear of heights to become the ‘bravest of them all’.

The wicked Queen becomes jealous when Snow White outdoes her in bravery, and asks a hunter to kill her and to bring back her heart.

The hunter, a friend of Snow White, ties her to a tree, but the young girl escapes. When Snow White bites the apple and ‘dies,’ a Prince comes, and stumbles upon her see-through coffin in the forest. 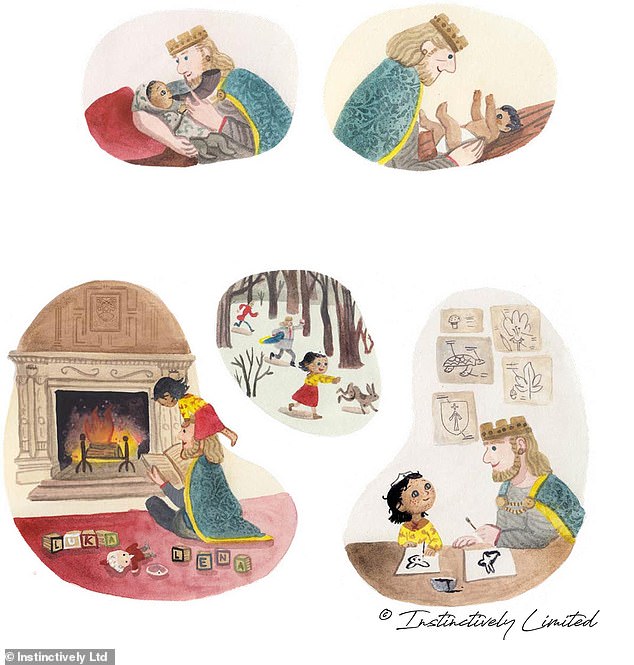 Snow White’s father is a successful single father raising her on his own, until he marries the Evil Queen. Pictured, illustrations showing Snow White’s childhood 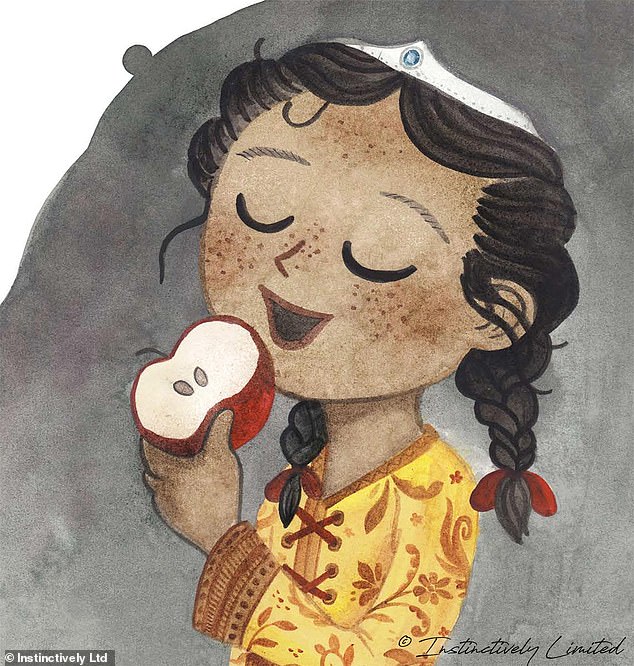 The poisoned apple is still in the story: Snow White then ‘dies’ and is put in the glass coffin. She is not saved by a kiss, but when the Prince trips into her coffin and dislodges the apple

He does not kiss the princess but instead trips against the coffin, disturbing Snow White and dislodging the piece of apple that had been stuck in her throat. 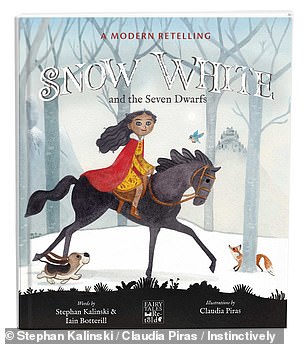 Snow White and the Seven Dwarfs: A Modern retelling, by Stephan Kalinski, gives the age old tale an empowering twist

The heroine still meets the Seven Dwarfs – renamed Sabrina, Akashi, Shakti, Leila, Egbo, Li and Thiago – but each represent a different ethnicity and both men are women are represented.

It was a conscious choice from Kalinski to introduce diverse characters to the tale.

‘Fairy tales give you the chance to teach kids about important values and I think diversity is simply not addressed nearly enough,’ he said. ‘It is such an important concept and I really want my children to grow up valuing it.

‘These stories have become so well known around the world that it was time to make them more representative of the children reading them.’

At the end, the prince and Snow are not romantically involved, nor do they life ‘happily ever after,’ instead, they go travel the world, one of Snow White’s dearest wishes.

The book comes with beautiful illustrations from Claudioa Piras. Kalinki added that all the images were vetted by his own daughter.

‘She loves painting and all illustrations in the book have been officially approved by her and her brother,’ he said. 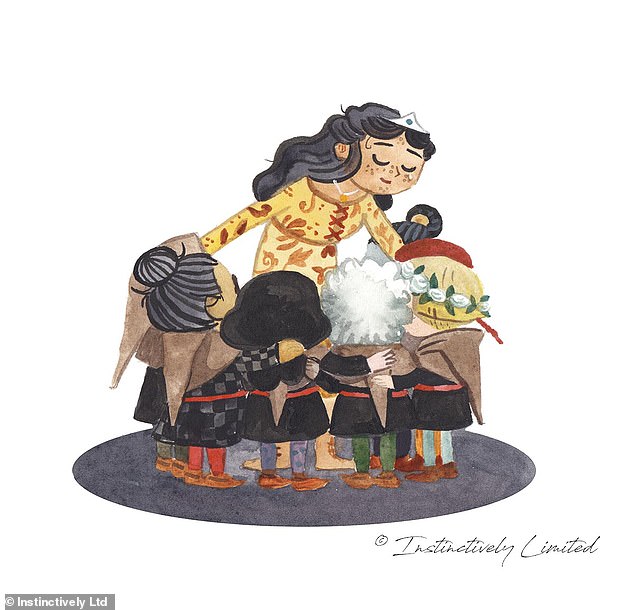 Instead of marrying, Snow White’s biggest dream is to travel around the world, which she does with her friend the Prince 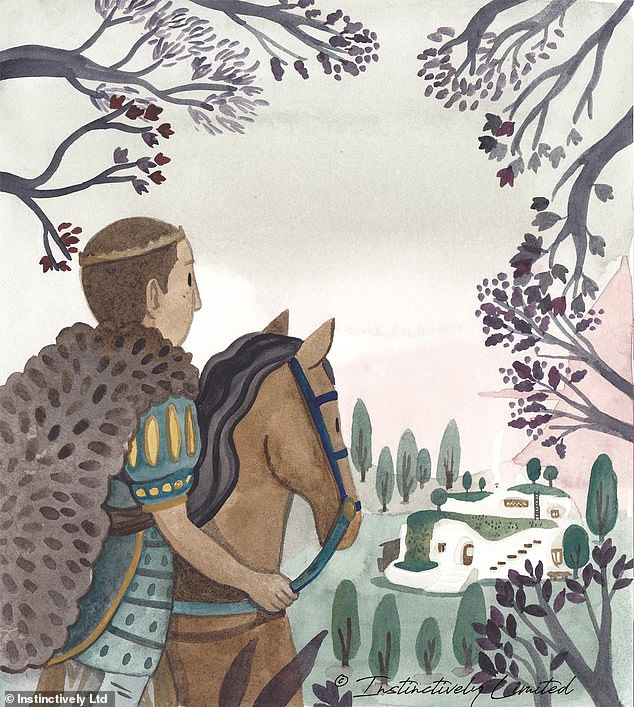 The Prince and Snow White are not romantically involved in this version of the tale, but become great friends

A Modern Retelling Snow White And The Seven Dwarfs is published by Instinctively Ltd.