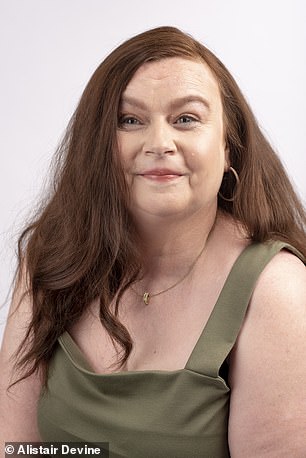 Fee, 52, (pictured) is a former support worker, who has been divorced twice

I’ve been married twice. I’ve been single since my last marriage ended a year-and-a-half ago.

I have a daughter and two sons. They are my world but, now they’ve flown the nest, I live alone with my little Yorkie dog, who is my baby now. It would be lovely to find someone to share my time with.

Divorced twice, with three children who are in their 20s.

A man who is fun and good for a laugh. I want someone loyal and faithful, who is kind and caring. I’d really love to find a gentle, loving man.

Yes, I was nervous. I wore a black dress and had a cheeky cocktail to settle my nerves.

I was disappointed when I saw Luke was dressed casually in a pair of jeans and a shirt, although his clothes, at least, looked clean and ironed.

When he was shown to our table, we shook hands but it felt awkward. He didn’t compliment me or say it was nice to meet me.

Easy To Talk To?

The conversation felt strained. It was hard to find topics we could both talk about.

He chatted about walking and the coast paths, and about music and films, but we didn’t have much in common. I think the only thing we both watched was Coronation Street.

He didn’t seem to spend much time at home, whereas I like to watch TV and chat to my friends and family.

We didn’t get into any serious conversations and there wasn’t any laughter. It’s a shame because the restaurant was lovely. The staff were friendly, too; more friendly than my date.

REGRETS? Wished we were better matched.

SEE HIM AGAIN? No.

Only when he tucked his napkin into his shirt, although that was more amusing than embarrassing. I didn’t mention it as there was no banter between us, so it would have come across as an insult. The funny thing was that despite the napkin, he still spilled food on his shirt.

No! I feel I’ve been out of the game for a long time so my flirting skills are rusty, but I wouldn’t have brought them out anyway. We shared a taxi to his train station and said goodbye.

I don’t see any point.

What do you think he thought of you?

I honestly couldn’t tell you as he didn’t give me any indication.

I don’t think so, as he’s too quiet and reserved for me. And we didn’t click. It was just bland. 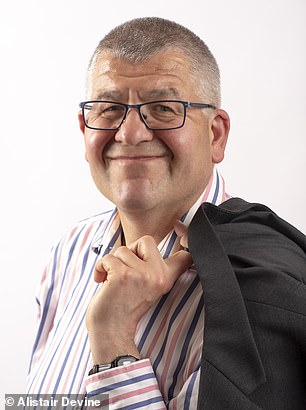 Luke, 51, (pictured) is a security guard, who has been single for three years

I’ve been single since July 2018. Although I’ve had six serious relationships, my longest was six months. I’ve never found someone to settle down with. I have a few female friends, but no one to cuddle up to at night.

I’ve done some online dating, but find it’s depressing as it’s hard to know what someone is like until you meet them in real life.

Single for three years, no children.

Someone active who loves walking, going to the cinema and 1980s retro festivals. I don’t like women who are money orientated or obsessed with their looks

Yes, as this was my first blind date. I wore a pair of blue trousers and a stripy shirt. I ordered a G&T to help me relax.

Fee was already at the table and, even though she was wearing a nice dress, I wasn’t attracted to her. It felt a bit awkward, but perhaps both of us were nervous.

Easy To Talk To?

Not really! We struggled to find things to chat about. I’ve travelled the world, but Fee isn’t interested in going abroad. I love walking, and have been all over Scotland, but she seems to prefer to stay local. We didn’t have much in common, except liking Coronation Street and dogs.

We had a laugh about the football, but there wasn’t much banter. We ended up talking about the food, which is never a good sign. She had curry and I had the roast dinner and we seemed to enjoy the food more than one another’s company.

There were awkward silences, then I dropped food down my shirt

Just awkward silences and I dropped food on my shirt.

LIKED? Fee made the effort and seemed friendly.

SEE HER AGAIN? No.

She was a lovely person, but there was no spark. It’s not her fault as we were mismatched. I’m a flirty person and love going on dates. There was no flirting from Fee and no kiss at the end.

No, we didn’t exchange numbers and just made polite farewells.

What do you think she thought of you?

She also thought we were mismatched. Hopefully, I came across as a nice guy, but maybe too quiet.

She’s a lovely person, but my walking friends would see us as a mismatch. They know I love keeping active. I have female friends and we hang out, and walk and talk, but Fee wouldn’t fit in.

Would you like us to find you a date ? Fancy a posh meal with an eligible single like you? Or would you like to play cupid for someone else? Email your — or their — details and a photo to blinddate@dailymail.co.uk