Target is being praised once again for how its stores treat nursing mothers.

On June 14, the Facebook group Breastfeeding Mama Talk shared a photo taken inside a Target store in Weatherford, Texas.

The photo shows a sign of the store’s breastfeeding policy, which encourages mothers to nurse wherever they want — but also offers up a comfy and private nursing room outfitted with free goodies for mothers who want to take advantage of it. 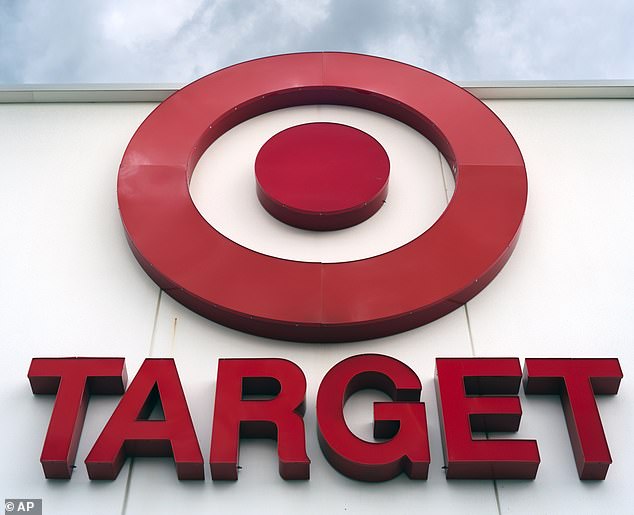 Nursing: Target is being praised on social media for how its stores treat nursing mothers, with women calling out a specific store in Texas for its positive policies (stock image) 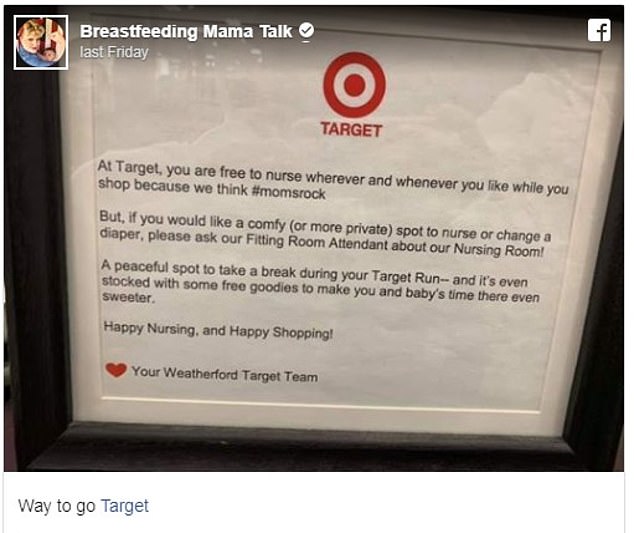 Options: A notice hanging in a Target store in Weatherford, Texas encourages mothers to nurse wherever they want — but also offers up a comfy and private nursing room

‘At Target, you are free to nurse wherever and whenever you like while you shop because we think #momsrock,” the company wrote in the notice, which was seen hanging in the store.

‘But, if you would like a comfy (or more private) spot to nurse or change a diaper, please ask our Fitting Room Attendant about our Nursing Room!’

The nursing room is described as a ‘peaceful spot to take a break during our Target run’ and add that it’s ‘even stocked with some free goodies to make you and baby’s time there even sweeter’. 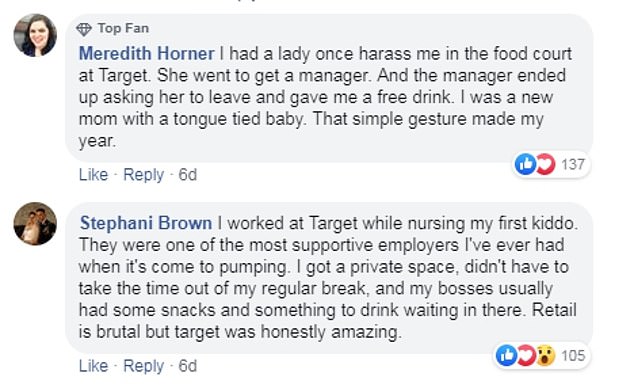 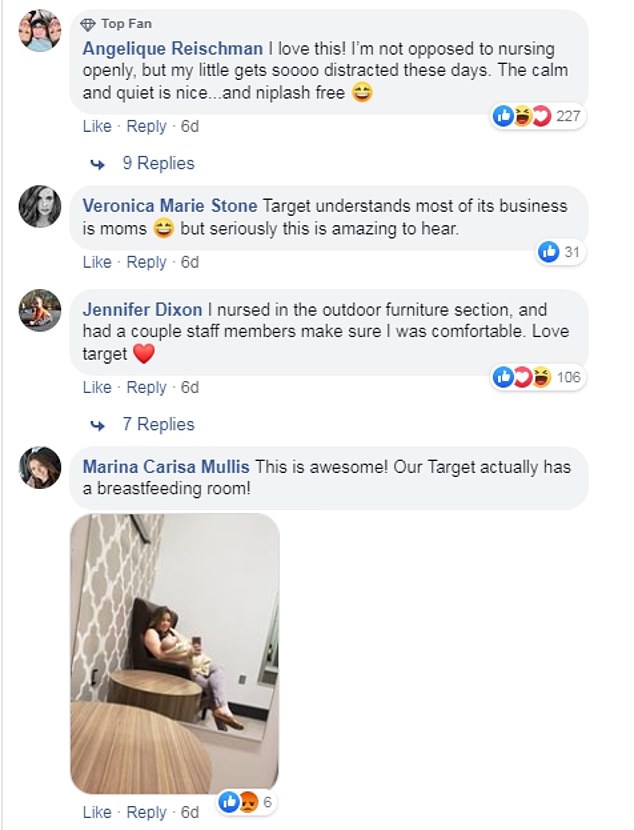 Way to go! Commenters applauded Target for the move, with some sharing their own stories of breastfeeding there

‘I had a lady once harass me in the food court at Target. She went to get a manager. And the manager ended up asking her to leave and gave me a free drink. I was a new mom with a tongue tied baby. That simple gesture made my year,’ wrote one.

‘A manager gave me a free water & pretzel when I was nursing a few years ago because she remembered how hungry BFing made her,’ wrote another.

One woman who visited a nursing room at another Target said it was ‘super comfy,’ while another said she nursed in the furniture section while staff made sure she was comfortable.

‘When I was nursing I would use Target’s dressing rooms. I was given a pillow, water and snacks. They even kept my older child occupied so i could nurse in peace!’ wrote yet another mother.

‘This is awesome!’ said another. 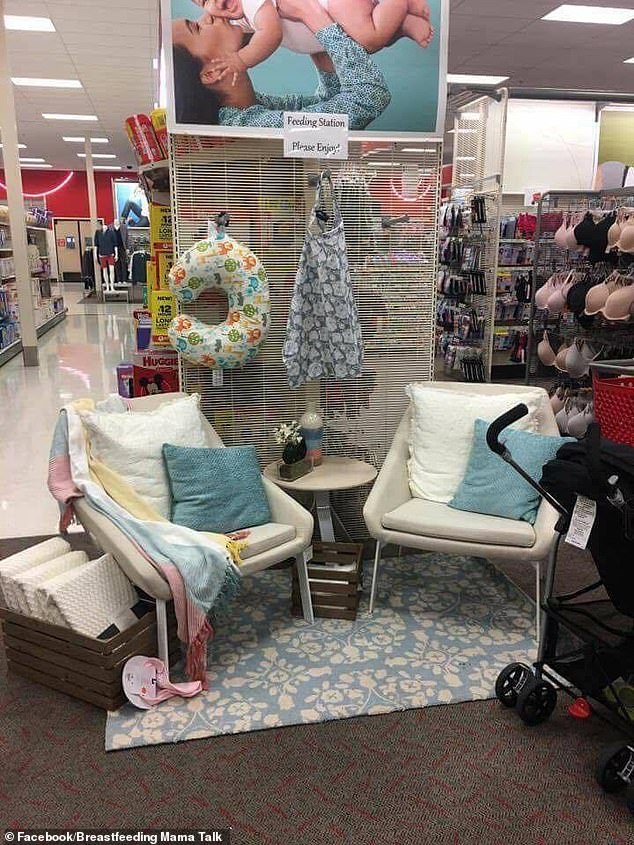 Cozy: Two years ago, a ‘nursing nook’ in a store in Braunfels, Texas also went viral 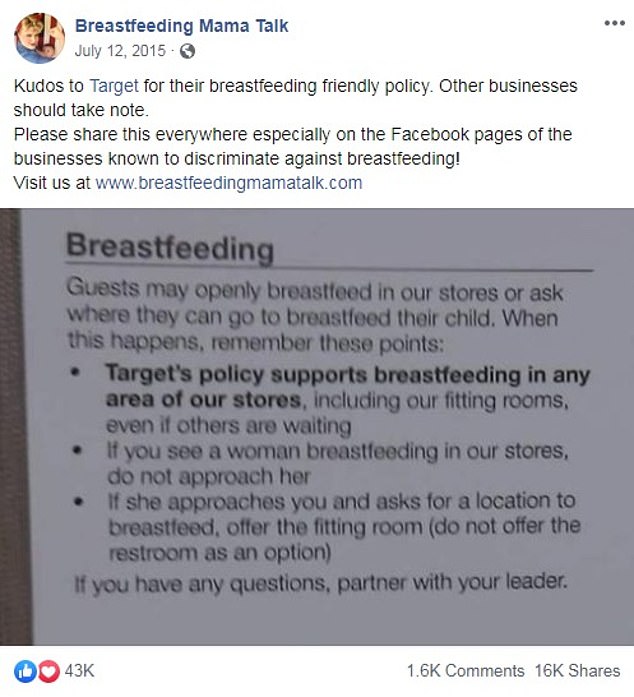 Going back years: And in 2015, customers applauded this sign from yet another store

This isn’t the first time that Target’s nursing policies have gone viral. Two years ago, the same Facebook group, Breastfeeding Mama Talk, shared a snap taken in a store in Braunfels, Texas.

The store had set up a ‘nursing nook’ with two chairs, pillows, blankets, and a table with decorations for moms to nurse.

The image also earned Target quite a bit of praise at the time.

‘Guests may openly breastfeed in our stores or ask where they can go to breastfeed their child. When this happens, remember these points,’ it read.

‘Target’s policy supports breastfeeding in any area of our stores, including our fitting rooms, even if others are waiting.

‘If you see a woman breastfeeding in our stores, do not approach her.

‘If she approaches you and asks for a location to breastfeed, offer the fitting room (do not offer the restroom as an option).’