The year is 2002 and I, as a wide-eyed 25-year-old writer from the Midlands, am fighting and contorting my way into a crowd of sharp-elbowed London fashion insiders.

It’s intimidating, uncomfortable and overpoweringly perfumed, but will be worth every bruise because, in this small room, lies treasure.

You see, this is the Mulberry sample sale, and I, fresh to the world of glossy magazines, am hellbent on buying a large Scotchgrain holdall, coveted by my mother, for a fifth of its usual price. That’s still half my rent — £100 for the £500 bag — but picturing Mum’s face lighting up on Christmas Day delivers a shot of oxytocin to my brain and an instant addiction to sample sales.

In those days, access to such bargain designer goods was jealously guarded — invitations came straight from fashion brands and PRs to selected journalists, stylists and ‘friends’.

The bunfights were ruthless, but the rewards great: an Anya Hindmarch bag for £70 not £700. Gina shoes for £150 instead of £500. Joseph cashmere cardigans for £40. A Diane von Furstenberg dress for £10, just before closing time. It was how most fashion journalists afforded the products we wrote about.

Nearly 20 years later, things couldn’t be more different. Because, last weekend, Jimmy Choo held its first sample sale in Birmingham, selling shoes and bags at 80 per cent off, with prices starting at £60.

To go, all you had to do was sign up for an alert from one of the apps or websites keeping fashion lovers informed of sample sales, such as Chicmi or Showcase. 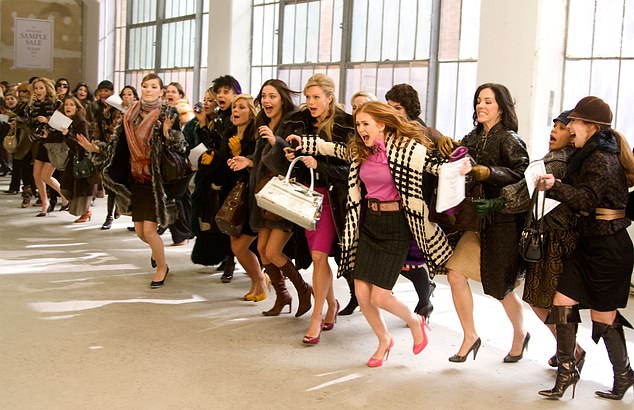 Art imitating life: Isla Fisher in Confessions Of A Shopaholic as women run for the sales

You couldn’t get much less ‘fashion type’ than tech entrepreneur Jamie Brown, who runs Chicmi. The site launched as a place to find fashion events and news, but what’s really taken off is the service notifying members of sample sales.

Thanks to changes in how fashion seasons work, now anyone can access the bargains.

‘We got into sample sales almost by accident,’ he says. ‘We just saw people get so emotional and passionate about them. We’ve got a big set of devoted shoppers, who post on the app about what’s in each sale, how good it is, price lists. It’s not about exclusivity any more, but it’s definitely a community.’

For the old-school fashion crowd, exclusivity was the point about designer sales, and many are seething that everyone now gets a look-in. But how clothes are manufactured and distributed has changed beyond recognition.

Once, sales were a way to get rid of old catwalk pieces and press samples. Now, fast fashion and internet shopping mean clothes are produced year-round in huge quantities. And, since fashion companies have been rightly condemned for sending excesses to landfill or burning them, sample sales are seen as the best way to clear stock. 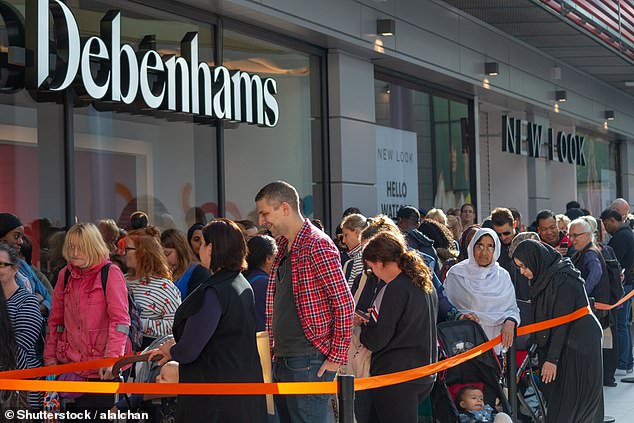 Kim Winser, founder of Winser London, does exactly that. ‘The problem with selling online is that when you’re down to half a dozen pieces in stock, you have to take them off the site, as it’s frustrating for people trying to order them. So this is how we sell them, alongside manufacturing samples.’

Perhaps, surprisingly for an upmarket brand worn by actresses Gillian Anderson, Emma Watson and model Yasmin Le Bon, her sample sales take place in village halls in places like Betchworth in Surrey and Whixley in Yorkshire.

‘People travel from Central London to the sales,’ says Kim. ‘But it’s our way of giving people around the country the opportunity to try our products before they disappear. They can discover the fabrics, check the fit and take a risk on something different without having to spend too much.’

WHERE TO GO TO BAG A BARGAIN

Being on brands’ ‘best customer’ lists is a surefire way to hear about sales, but some labels use mailing lists, local magazines and online message boards.

The site now includes events across the UK, particularly in Birmingham and Manchester. However, as these aren’t frequent, you will have to sign up for London sales alerts to hear about them. VIP status grants access to previews and exclusive sales. Upcoming sales include Ted Baker, Jenny Packham and Anya Hindmarch.

Not one of the more polished sites, but extremely comprehensive for sales beyond London. It also covers smaller brands and specialist sales such as bridal.

Curate holds well-organised invitation-only sales in London and Manchester, with such brands as Joseph and Etre Cécile.

But how big are the discounts? Kim says you might find a wool coat for £199, reduced from £499, or a Gillian Anderson-designed cashmere-blend roll-neck for £79, down from £195.

Meanwhile, Chicmi’s community of sale-goers gleefully share best buys on the site. One was thrilled with her £350 Chloe tote (originally £1,220); another filled bags with Karen Millen tops, skirts and dresses priced between £4 and £8.

But before you ask why shop full-price again, it’s worth considering less positive comments, too: ‘all the good stuff had gone’; ‘hardly any sizes’; ‘clothes look tired and have defects’; ‘staff were rude’.

There can be limited stock, items may have hung around for a season or longer, there may be lower-quality manufacturing samples and you are unable to return anything — so you are paying a price for a discount. Plus, occasionally, there’s an entrance fee of £2 or more, so you might pay to shop, but find nothing.

Chicmi’s Brown has some good tips from its message boards. ‘The more familiar you are with a brand, the better,’ he says. ‘If you can, try on their clothes to work out your size, and browse the website first so you have an idea of what you’re looking for.

‘Come wearing something sensible, because there may not be a changing room. Seasoned shoppers often wear athleisure, or even a swimming costume, so they can try on in the open.

‘Take both cash and cards. In the first hour, you’ll get the best picks, but the last hour often yields extra discounts.’

Regular sample-sale-goers would add: don’t panic-buy. That Marni dress might be £45, but if it’s cut asymmetrically so you can’t lift one arm, is it a good buy? (Reader, I bought it.)

While sales happen year-round, it can be a seasonal game. Jamie says, with spring and winter the best times. ‘Right now, you could easily fill a few days in London with back-to-back sample sales.’

With Christmas coming, savings on gifts could justify a festive trip to London’s sample sales.

If my mum’s Mulberry holdall is anything to go by, it’s worth it: the bag is still in regular service — a good return for a few elbowed ribs.

Will get Ones Keto Diet program Apparent Or even Mucky?

We Inform You Of Best Hookup Web Sites