An Australian mum-of-five has left other parents stunned after revealing the staggering array of ‘essential’ items she packs when driving anywhere.

The mother recently posted photos of her kit to Facebook, sharing how she’d streamlined her system after purchasing a carry-all from Kmart for $11.

‘I can still fit my big twin pram in the boot as well as the organiser which was a necessity for us as we have 14-month-old twins,’ she wrote alongside photos showing her well-packed travel bag.

Individual ziplock bags with a change of clothing for her kids and herself, sanitary items and nappies, two stubby holders, a bottle opener, and a headtorch were just a few of the things she’d included. 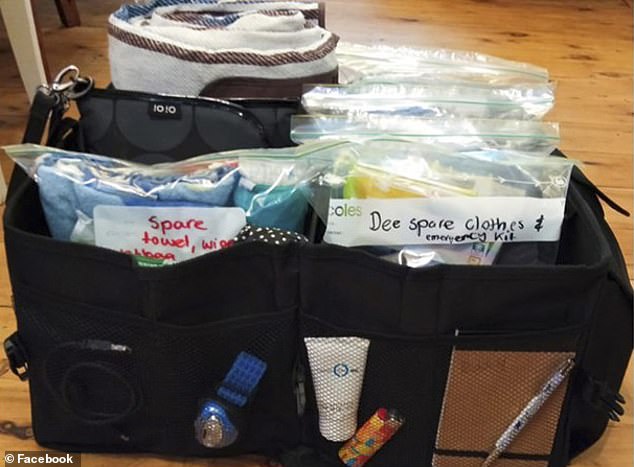 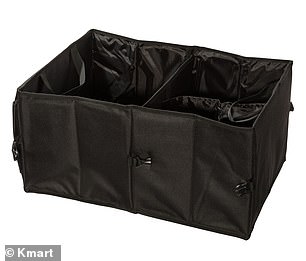 This carry-all from Kmart, priced at $11, was used by the mum to create a streamlined system (pictured)

She added she also packed a ziplock bag containing a spare towel, flannelette cloth nappy wipes, and a wet bag (this is a bag used to store dirty nappies).

This was in addition to a baby change clutch packed with wipes and two spare nappies.

Other items included in the kit were spare toothbrushes and toothpaste, and spare supermarket bags for shopping

Things of a more practical nature to feature were a headtorch, two stubby holders and a bottle opener and a lighter, a picnic rug and an umbrella.

Lastly, she said she packed sunscreen, charger cables, a note pad, a screwdriver and scissors. 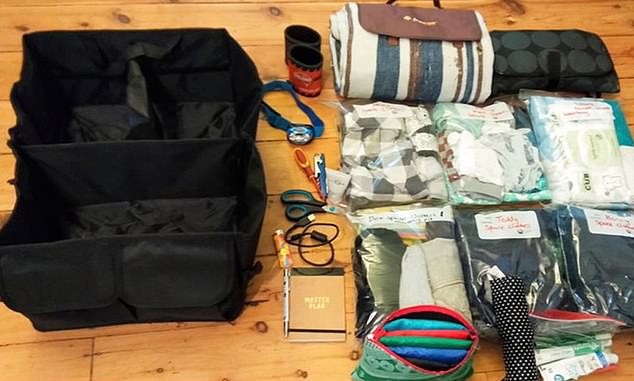 Once unpacked, the travel kit revealed all manner of items including changes of clothing for the kids, a notebook, chargers, pens and a headtorch (pictured)

She said she had also reduced what she had stored in the main part of the car, revealing her glove box now contained hand wipes, CDs, a pen, car booklet and sunglasses.

‘There’s no centre console, but I keep wipes in a little console that is there,’ she said.

‘In the doors and the back of seats, I keep vomit bags and my son’s asthma stuff. One seat pocket has baby travel blankets in it.’

As well as her car carry-all, the mother said she also has a nappy bag that’s packed and ready to go by the front door. This contains a mini-medical pouch.

The organised mum revealed she’d also packed a carry-all for her husband to use in his car (pictured), although she said this contained different items to those she had in hers

She added she was planning on buying a First Aid kit from Aldi when they launch these as part of their Special Buys in the coming months.

‘Also need hand sanitiser and insect repellent. Things like jackets and hats live in the house as we live in town and often walk places so we don’t always need to use the car.’

She added she had also created a carry-all for her husband – but it was very different to her own.

‘We only travel as a family in hubby’s car if we’re going 4wding or off-road. So it is used for different purposes to our other car.

What items are packed in the woman’s car?

* A ziplock bag with spares toothpaste and toothbrushes

* A small green bag with supermarket bags in it for groceries

*A baby change clutch with wipes and two spare nappies

* A picnic rug, an umbrella, a headtorch

What items are packed in her husband’s car?

* A baby pack with wipes, nappies, bibs and a flannelette cloth nappy

* A drop sheet to keep the boot clean when he collects wood, transports the chainsaw

* Tools including a screwdriver, spanner and pocket knife

While the mother’s post has left many reeling, others were also prompted to say they carried as much as she did, as well as adding a few things the mum might want to add.

One mother said she always had a disposable poncho on-hand, something that came in handy after she’d been hit by a car at night in the rain.

Another said: ‘Not sure if it’s been suggested already but I always have a warm jacket in my boot for all of us. 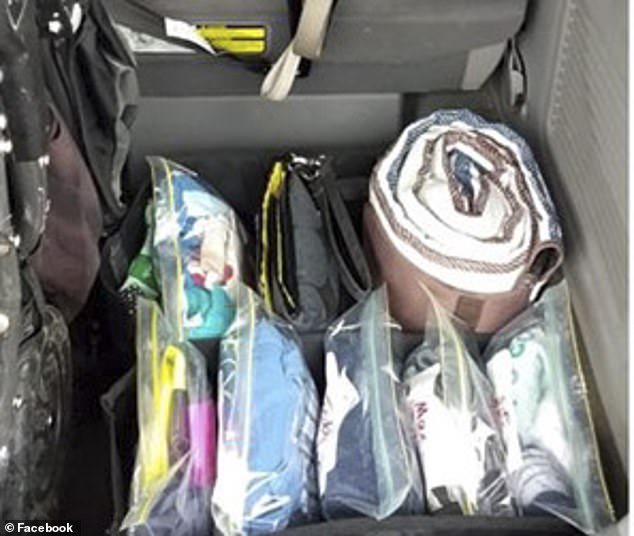 ‘As well as a beach towel or two and a box that has toys and books as well as sports equipment and hand sanitiser and some of the 15c Woollies bags, because I have two environmentally mindful children who like to pick up other peoples trash!’

‘I know it seems excessive, but sometimes you get stuck in a jam with kids and the bag you usually pack, you’ve somehow forgotten something.’