A mother-of-two and her husband of more than four years who spiced up their struggling marriage by inviting a friend to form a polyamorous throuple with them say that the move has made their relationship stronger than ever – and left their kids delighted thanks to the presence of a second dad.

Homemaker Meghan Davis, 34, and vending delivery driver Brent Davis, 34, from Portland, Oregon, started dating in 2011 and married in 2016, and they have two together – Braeden, 11, and Cedar, seven.

By early 2020 however, the couple’s relationship was on rocky ground; despite being happy together, they couldn’t help but feel that something was missing from their relationship – as if the ‘twinkle was missing’.

They took some time apart, before deciding to work through their issues – and it was then that they discussed how a third person might help to bring that missing element to their marriage.

Meghan had always been interested in polyamory, a concept that she first discussed with her husband in 2019. The mom says she had always been an advocate of the philosophy that it ‘takes a village to raise a child’ and her interest in inviting another person into her marriage was inspired by that notion. 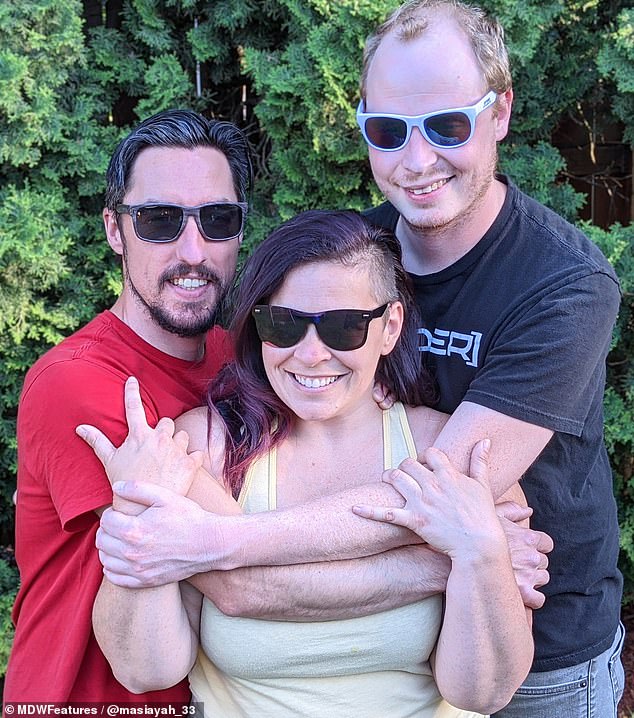 Three’s not a crowd! Mother-of-two Meghan Davis has revealed how she saved her struggling marriage to husband Brent (left) by forming a throuple with his friend Beau Woodbyrne (right) 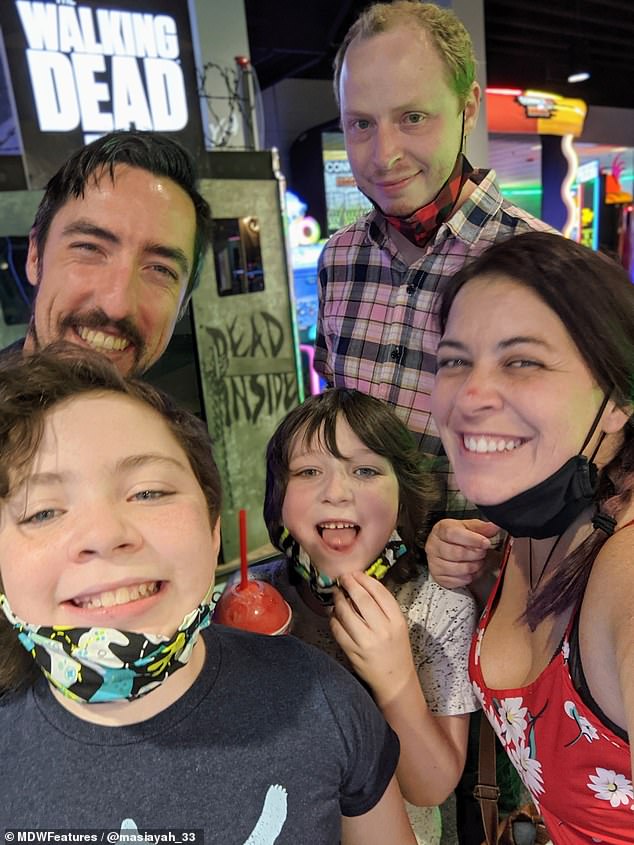 Family: Meghan and Brent, both 34, have been married since 2016 and have two kids together, but in 2020 their marriage ran intro trouble, so they invited Beau, 32, to join the relationship

But before the couple committed to exploring polyamory, they wanted to take the time to fix the issues in their own relationship.

After running into trouble in early 2020, they determined that they both needed space from one another, and the pandemic actually served as the perfect opportunity for them to live separately.

Because Brent worked with members of the public, they felt that the best way to keep their children safe from the coronavirus would be to have him move out of the family home and into an Airbnb, where he lived for two months.

Then, in May, Meghan and Brent sat down together, aired their grievances and renewed their love for one another.

Now that their marriage was back on track, the couple finally decided to pursue their interest in polyamory.

With Meghan realizing that she had romantic feelings for the couple’s friend, software validation engineer Beau Woodbyrne, 32, she proceeded to ask him if he wanted to date her.

Initially, Beau laughed the idea off but after discussing it further, the trio decided to give polyamory a try. The couple formed a ‘V’ relationship in which Brent and Beau are not romantically involved with each other but are connected through their love for Meghan.

Brent is also allowed to date other women, but currently Meghan is the only one in a second relationship. Meghan and Brent say that the introduction of Beau into their marriage has ‘brightened up’ their relationship and has brought them closer than ever before. 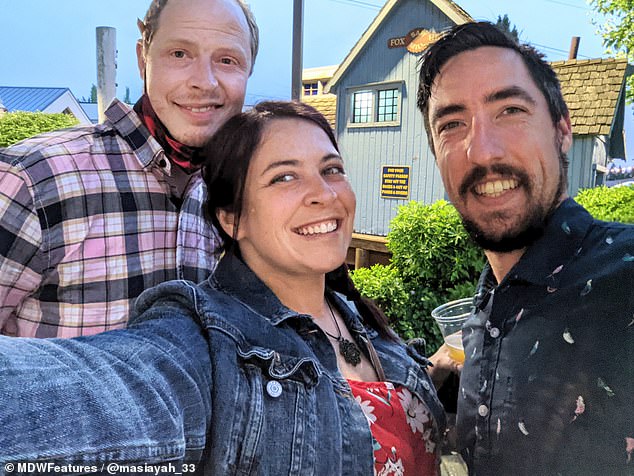 Coming together: Before exploring polyamory, Meghan (center) and Brent (right) focused on sorting out their own issues, taking two months apart in order to figure out what they wanted 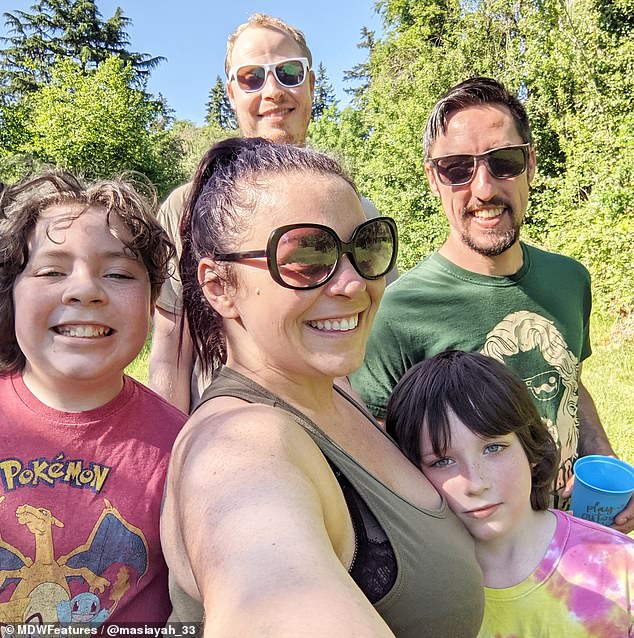 Moving forward: After reuniting and workout through their issues, the couple decided to give polyamory a go when Meghan realized she had feelings for Beau, who she asked to date her

Fortunately, Meghan and Brent’s children are happy to have Beau around, as it means there is one more person to hang out and play with. The trio’s families, whilst supportive too, have been skeptical about their relationship – not wanting anyone to get hurt as a result of things going wrong.

Online, most people react positively to the trio calling them ‘beautiful’, however, some say that they ‘wouldn’t be able to handle it.’

‘When the idea of polyamory first floated to my mind, I thought it was totally nuts,’ said Meghan. ‘Yet at the same time, it brought this feeling of relief.

‘It made me realize that I had so much love to give and Brent is only one person. ‘I could tell I was overwhelming him a bit with my constant need to pour love into him and my feeling like I was expecting too much in return.

‘When I thought of polyamory, I realized it is no different than having several friends that I love.

‘Nobody tells me to pick just one to love in other relationships. Why would my romantic love be treated any different?

‘We discussed polyamory at the end of 2019, and it felt like a logical concept to further explore.

‘However, it was clear that we both needed to work a bit on figuring out ourselves before we tried anything new in the relationship. 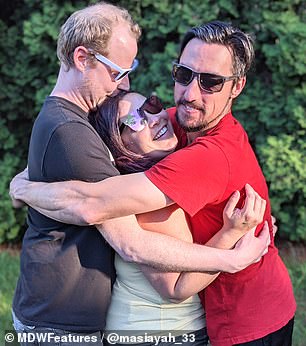 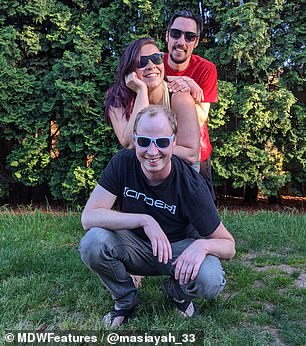 Shock: The mother-of-two says Beau initially laughed off the idea of joining her marriage, but he soon came around to the idea when he realized that the couple was serious 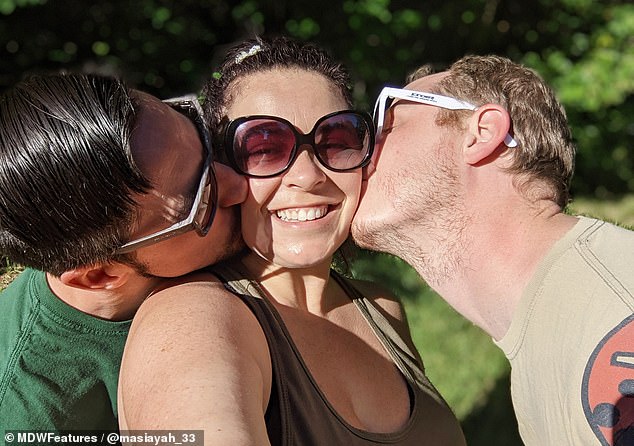 Balance: The trio are in a ‘V’ throuple, meaning that Meghan has a sexual relationship with both men, however Brent and Beau are not romantically involved 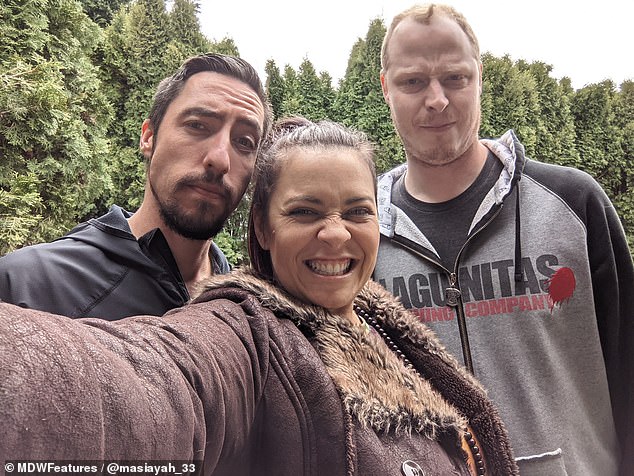 Together: ‘When Beau came into our lives, he immediately felt like family,’ Meghan said

‘Just days before COVID-19 made its way across the globe and all the uncertain events that ensued, we decided we needed to take a break from our relationship.

‘I had come to a place where I felt ready to do whatever I needed, including risking losing a husband, in order to heal and move forward in a happy life.

‘Brent moved out and stayed in an Airbnb and I stayed at the house with the kids.

‘In May, we sat across from one another, masked and socially distanced, and read letters to each other.

‘We outlined all of our pain, epiphanies, and realizations that we had come to during our time apart.

‘Somewhere in the constructs of life, we get so hung up on our roles in our relationships that we forget that we are here because we want to be. When Beau came into our lives, he immediately felt like family.

‘Beau had been there for me during a particularly difficult time in my life, right around the time when the idea of polyamory had come to me. 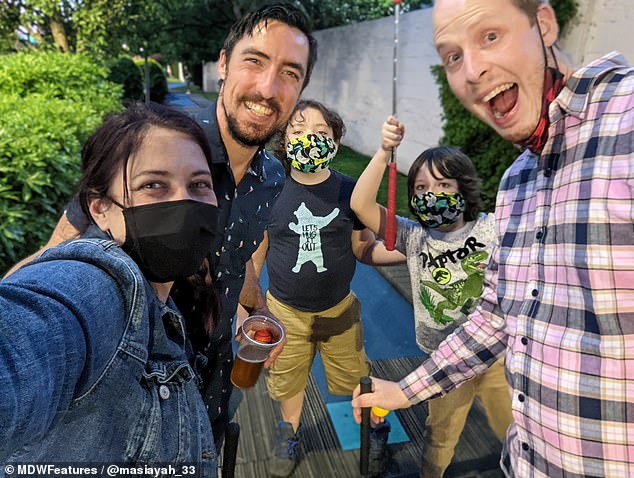 The more the merrier: Brent and Meghan’s two children, Braeden, 11, and Cedar, seven, both loving having two father figures 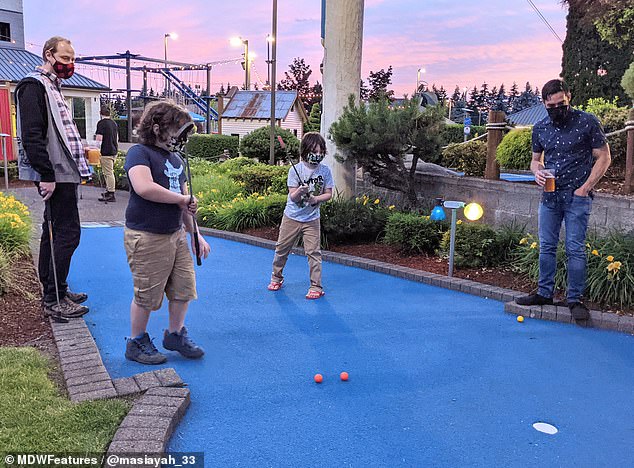 Blessing: Fortunately, Meghan and Brent’s children are happy to have Beau around, as it means there is one more person to hang out and play with

‘Of course, this was not an easy leap to make. All three of us had always been monogamous and as much as polyamory made sense to us, discussing it as a concept and living it out in real life were two different things.

‘I confessed to Beau that I had feelings for him and wanted to know if he would be interested in trying polyamory out.

‘Initially, he laughed at the idea as it just seemed far too difficult to try to pull off but after lots of communicating, we decided to give it a try.

‘Almost a year later, we are happily exploring this new love adventure together.

‘It has brightened our relationship in ways we can’t even explain.

‘The level of trust and true, unconditional love that comes from this lifestyle is so deep.

‘It hasn’t always been easy, but it has been centered around a truly beautiful love.

‘The family members who do know have been supportive and loving but it has, of course, come with a lot of communicating.

‘We have gotten lots of questions from our loved ones, who mean well and want to support us, but are nervous about us getting hurt. 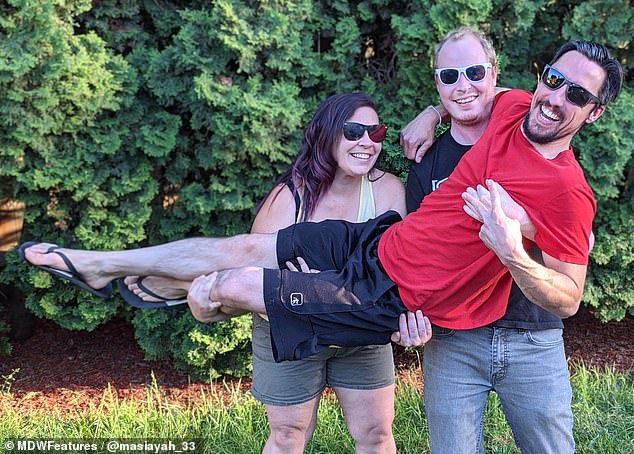 Advice: For those thinking about trying out a polyamorous relationship, Meghan, Brent, and Beau stress that having love for yourself first is key 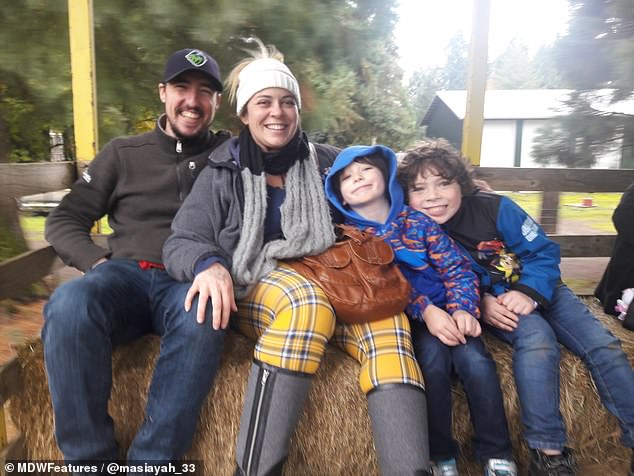 Strong: Meghan and Brent’s marriage is better than it has ever been

‘When in public at first, people seem a little uncomfortable, like they don’t know how to react but once they see how much it works and makes sense and how much this is just about love, it just feels like any other relationship.’

For those thinking about trying out a polyamorous relationship, Meghan, Brent, and Beau stress that having love for yourself first is key.

‘If we could give anyone advice on trying a nonconventional way of loving, it would be to first find love and healing within yourself,’ said Meghan. ‘Polyamory forces you to be introspective. I can’t always go to Beau or to Brent to get my cup filled. I first have to check in with me.

‘It’s too easy to burn out when you have two partners and a family, so each of us being in touch with ourselves has provided so much more space for love and less room for arguments.

‘It is truly so liberating, the beauty and security we have found as individuals, has brought a brand new twinkle into our relationship.

‘When we feel heard and validated, we are able to create space for vulnerability and when we are willing to be vulnerable, we can step into our bravery more easily, knowing truly who we are.

‘This isn’t the dress rehearsal for life, this is the real deal, so just let yourself love and be loved.’