A man has provoked a heated debate after asking Money Saving Expert for advice on dividing a Lottery win.

Posting on Instagram, the British budget experts shared a question from an unnamed man whose brother won £500 on a National Lottery Scratchcard, which his girlfriend gave him at Christmas.

They explained that the girlfriend believes she’s entitled to some of the money because she bought the Scratchcard.

The #MoneyMoralDilemma divided their 82,000 followers as some argued gifts don’t have to be shared, while others claimed they would split their winnings with their significant other in any circumstance. 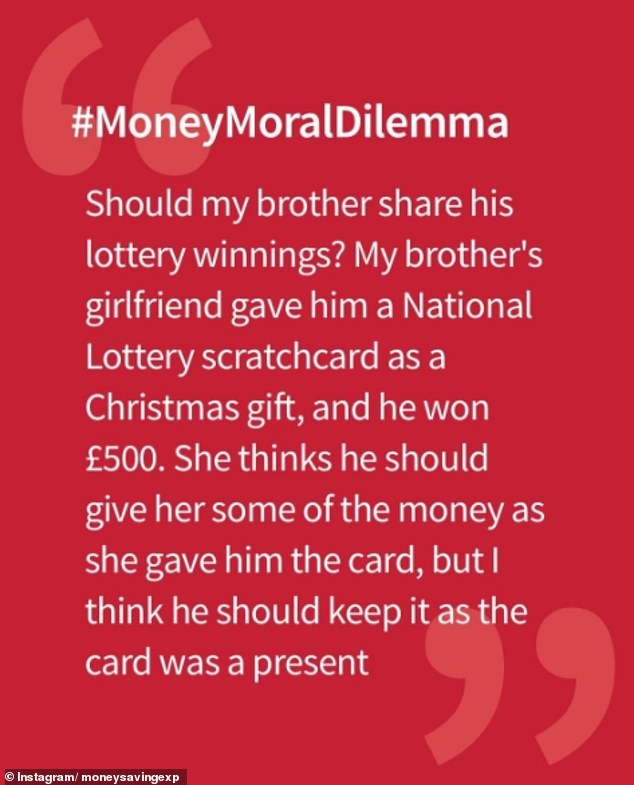 Money Saving Expert sparked a debate about sharing lottery winnings, after revealing a man is torn if he should give any of his windfall to his girlfriend who bought the scratchcard

Explaining the situation, Money Saving Expert posted: ‘Should my brother share his lottery winnings? My brother’s girlfriend gave him a National Lottery Scratchcard as a Christmas gift, and he won £500.

‘She thinks he should give her some of the money as she gave him the card, but I think he should keep it as the card was a present.’

More than 100 people shared their opinion, with many agreeing with the man that his brother shouldn’t split the winnings.

‘Why would you share a Christmas present? The ticket was a present for him, so the product of that ticket is also for him to do what the hell he likes with it,’ one wrote.

Another said: ‘That’s like giving someone a blender for Christmas and then demanding they give you half the smoothies you make’

A third added: ‘He won £500 not £50m, plus after you gift something it’s a bit rich asking for it back. She’s just gutted it was a winner and didn’t keep it herself. There’s no dilemma… move on’

However others claimed they would share the winnings or use it to buy something they can enjoy with their significant other.

‘If this was me I’d be booking a holiday away with said girlfriend! Or something nice they can do together? And note to self, don’t buy Scratchcards for others,’ one wrote.

Another said: ‘I would give a little to her, but a gift is a gift. This is why I rarely give lottery tickets’

A third argued in favour of the girlfriend saying: ‘Two people should not be in a relationship if they have money issues. She shouldn’t ask for it and he should be happy to share it with her… simple as that.’

Another joked: ‘It was a gift he owes her nothing, but to keep her quiet give her the scratch card money ha’