The Duchess of Cambridge gave a nod to NHS heroes with her outfit as she joined Prince William to present hospital workers with a Pride of Britain award.

Kate Middleton, 39, wore a £250 rainbow print blouse from London-based label Lisou for the outing. Rainbows have become a symbol of support for the NHS during the Covid-19 pandemic.

The Duchess of Cambridge wore the blouse under a blazer from Canadian label Smythe and accessorised with earrings from Spells Of Love. 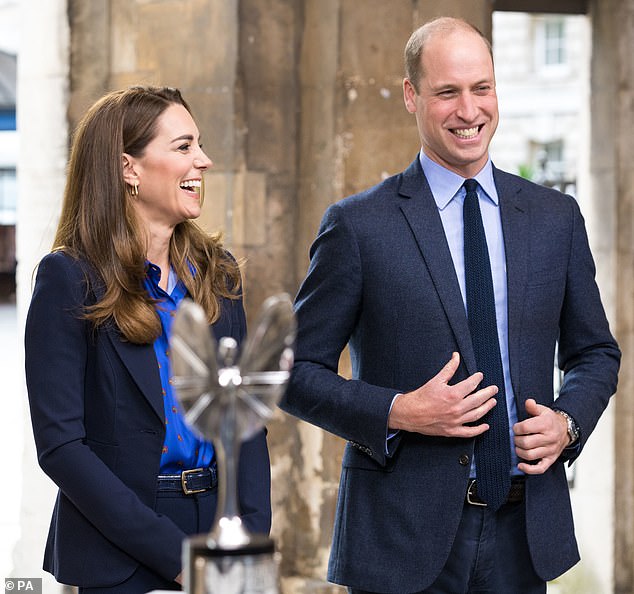 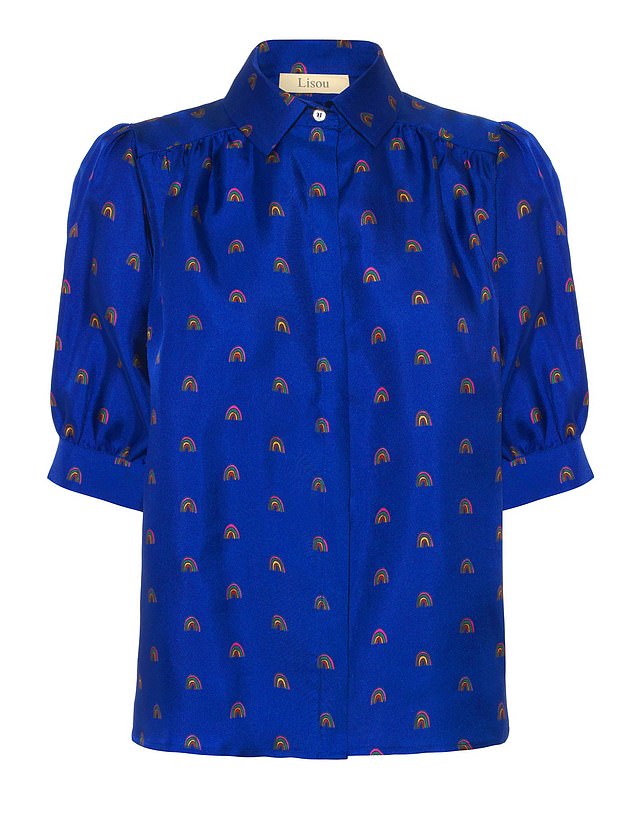 Kate Middleton, 39, wore a £250 rainbow print blouse from London-based label Lisou for the outing. Rainbows have become a symbol of support for the NHS during the Covid-19 pandemic

Upcoming British brand Lisou is one an under-the-radar labels well-loved by a coterie of celebrities from London to Los Angeles, including Dame Helen Mirren, Gwyneth Paltrow and Hilary Duff.

Launched in 2018, Lisou is rapidly gaining a cult following for its elegant silk shirts, skirts and blouses, each in a vibrant print dreamt up by its founder Rene Macdonald.

Rene’s wish to give back is what makes Lisou more compelling than the average start-up.

By teaming up with environmental organisation One Tree Planted, Lisou will plant five trees (in Africa, North America, Latin America, Asia or Australia) for every purchase. Closer to home, Lisou has also been supporting the Royal College of Nursing, funding a hardship grant as well as donating 20 per cent of profits to its Covid-19 Support Fund.

The Duke and Duchess of Cambridge joined TV presenter Kate Garraway to present frontline workers at St Bartholomew’s in the City of London with the Pride of Britain award earlier this month. Photos of the event were released yesterday.

Prince William told Kate Garraway that he and the Duchess of Cambridge wanted to give her a hug after hearing that her husband was critically ill with Covid.

The royal couple were clearly moved by the plight of Derek Draper, who was taken into hospital with coronavirus symptoms on March 30.

The Duke of Cambridge told her: ‘You are doing amazingly though. If it wasn’t for social distancing, we would both give you a hug,’ according to The Mirror. 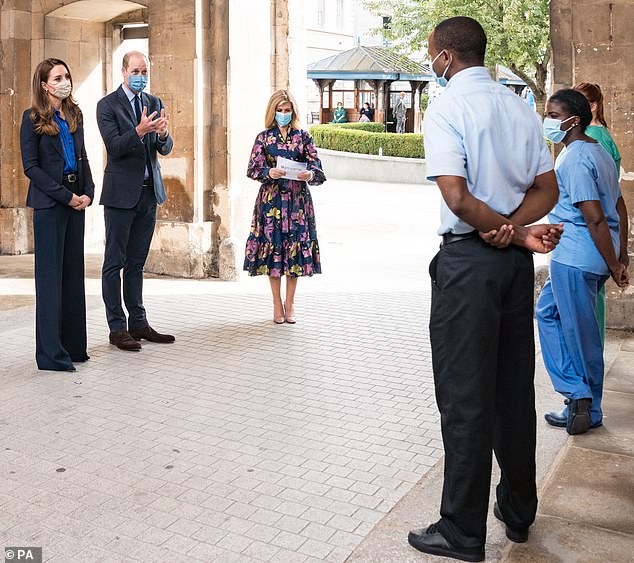 Prince William told TV presenter Kate Garraway that he and the Duchess of Cambridge wanted to give her a hug after hearing that her husband was critically ill with Covid. The royal couple met Kate while attending a Pride of Britain award at a London hospital (above)

In 2020, the rainbow became a symbol of hope and gratitude.

So it was touching to see the Duchess of Cambridge wearing a blouse with little rainbows printed on it as she and her husband presented the Pride of Britain award to National Health Service workers on behalf of the nation. The blue is a nice nod to the NHS too!

It’s by Lisou, a label we’ve spotted on everyone from Emma Louise Connolly to Gwyneth Paltrow. The short, puffy sleeves give this blouse a vintage vibe, plus it’s 100% silk so it’s super luxe.

Click (right) to buy it now. Kate teamed hers with a navy blazer by Smythe and gold earrings by Spells of Love – both of which you can get your hands on via the edit below.

And while you’re shopping, you’ll find a few more rainbow print pieces that are guaranteed to brighten up a grey day!

* PRICES MAY NOT BE AS ADVERTISED 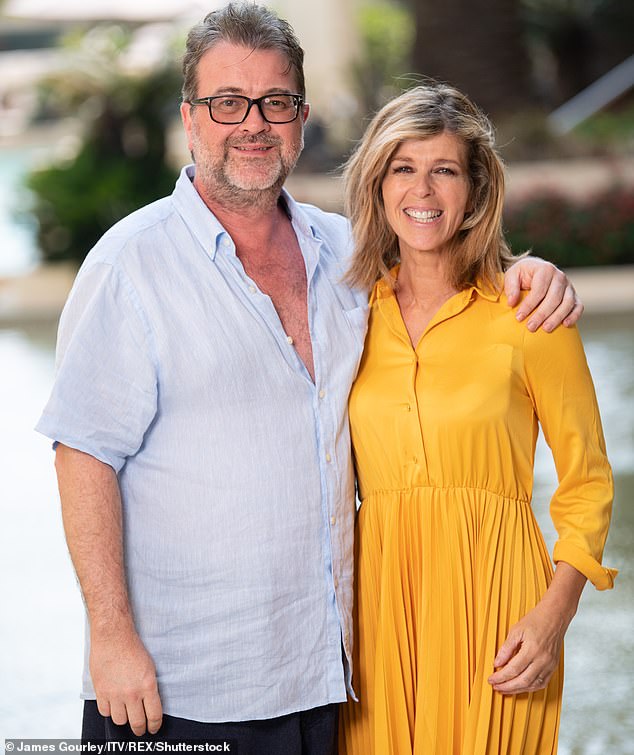 The Cambridges were moved by the plight of Derek Draper, who was taken into hospital with coronavirus symptoms on March 30. The Good Morning Britain host’s 53-year-old husband remains in intensive care after being in a coma for several months. (Pictured in 2019)

The Good Morning Britain star’s 53-year-old husband remains in intensive care after being in a coma for several months.

The 53-year-old star also told them about the impact Covid has had on her family, adding that their children – Billy, 11, and Darcey, 14 – cannot see Derek as only one visitor is permitted per patient.

The Duchess of Cambridge told Kate that she thought she was ‘amazing’ to be carrying out her role at the hospital despite her family situation.

The presentation at the hospital was filmed for the climax of the Daily Mirror Pride of Britain Awards 2020, in partnership with TSB, which will be broadcast on Sunday, November 1 at 9pm on ITV.

Thousands of members of the public nominated all the frontline NHS heroes to receive a special recognition Pride of Britain award.

During the event, Prince William said: ‘The devastating impact of the coronavirus pandemic has reminded us as a nation of how much we owe to the thousands of NHS workers who have gone far beyond the call of duty this year.

‘They have worked tirelessly around the clock, with humility and compassion, in the most challenging of circumstances, putting their own lives on the line to help others.

‘It is fitting that we are here today at Britain’s oldest hospital to thank and celebrate our NHS staff and to honour them with a Pride of Britain award.’ 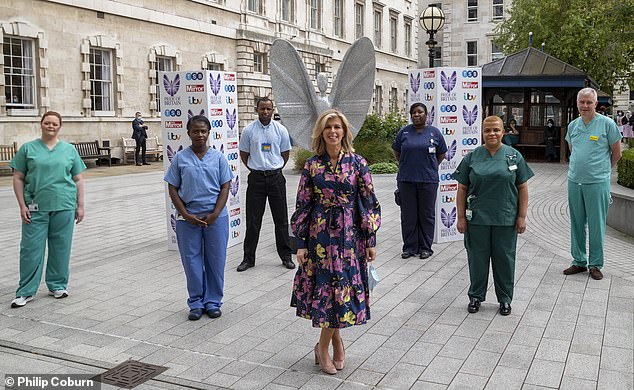 The Duchess added: ‘Through our conversations with frontline workers during the pandemic, we have been inspired by their stories of bravery and selflessness.

‘Many have had to leave their families for weeks on end, some have come out of retirement to help, while others have stepped into new roles to play their part in the fight against coronavirus.

‘And it is not just the medical teams – all NHS staff have played a crucial role through this time.

‘During lockdown, we joined people up and down the country to applaud the NHS and our keyworkers each week. Their hard work still goes on and we remain indebted to them for all they do.’

As the royal couple presented the award, which was on a table next to them, Prince William enthused: ‘We cannot thank you enough. On behalf of a grateful nation, it is a tremendous honour for Catherine and I to present this special recognition award to the army of dedicated NHS staff.’

Kate Garraway introduced the royal couple to the six NHS representatives who each talked to them about the challenges they and the health service have faced in fighting coronavirus.

St Bartholomew’s, in the city of London, is Britain’s oldest free hospital which has been treating patients for around 900 years, a period which spans the Black Death, Spanish flu and, this year, coronavirus.

Hosted by Carol Vorderman, the Daily Mirror Pride of Britain Awards, in partnership with TSB, is the biggest annual event on British television which, since 1999, has been celebrating the achievements of the nation’s unsung heroes.