Whether you prefer French fries or thick-cut potatoes, everyone has their own preference when it comes to crispy, golden chips.

‘In the case of McDonald’s, for 30-days I ordered chips twice a day from there to make notes on how consistent they were.

‘The list is the result of months of research and analysis, so it’ll be 100 per cent correct and not up for debate.’ 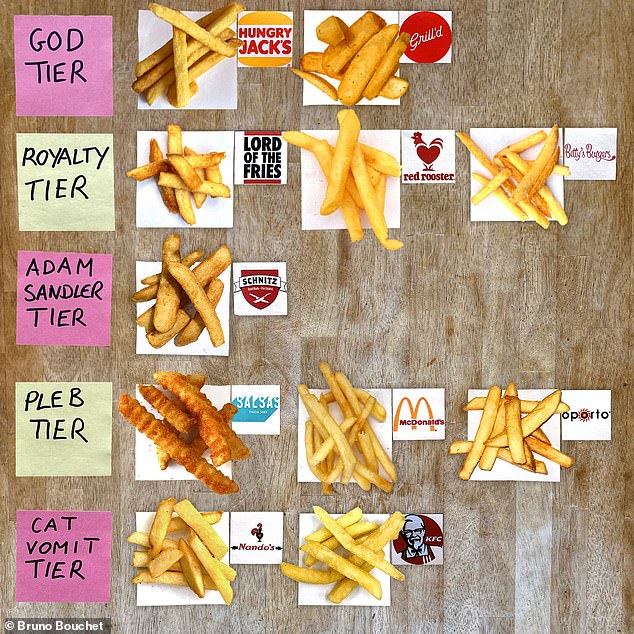 The self-proclaimed ‘List King’ crowned Hungry Jacks and Grill’d as the best in the ‘God Tier’.

‘For an entire week, I ate two servings of fries from Hungry Jacks and could never find a bad word to stay about them. Consistently the greatest chips you’ll ever have,’ the managing director and the former Kyle & Jackie O radio show producer said.

‘The chips are as fat as you want them to be without getting a mouthful of mash. They should change their slogan to “the chips are better at Hungry Jacks”.’

‘The herb mix seasoning is always on point and their dipping sauces work perfectly in conjunction with the chip’s taste and texture, rather than masking them like many other places’ sauces,’ he said.

In the ‘Royalty Tier, Mr Bouchet picked Lord of the Fries, Red Rooster and Betty’s Burgers.

He said the fries from Lord of the Fries win the award for being the ‘crunchiest in the country, while Red Rooster has the ‘best chicken-seasoning’ in the country.

‘The salt is wonderfully distributed and they’re always cooked fresh. The fact they’re 100 per cent vegan is pretty darned cool too,’ he said.

‘You’d be hard-pressed to find anyone that doesn’t agree that Red Rooster’s chips are anything other than crowd-pleasers.

With Betty’s Burgers, Mr Bouchet said these ‘new kids on the block have come in all guns blazing and have well-and-truly earnt their position as one of the top chips in the country.

‘It’s like they’ve taken the McDonald’s chip and renovated it to make it crisper and less greasy,’ he added. 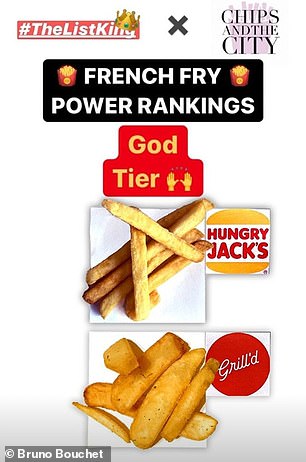 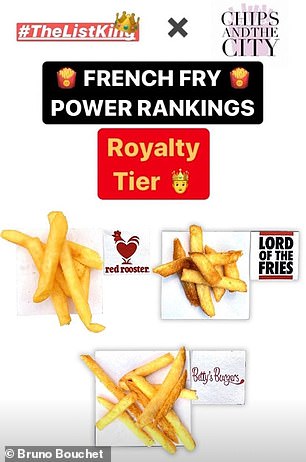 ‘Hungry jacks chips for the win!!’

‘I’ve never seen anything so incorrect’

‘I think you nailed this one Bruns…. Red Rooster chips are the best!’

In the centre of his rankings, he put Schnitz in the ‘Adam Sandler Tier’, or what he describes as the ‘take it or leave it’ category.

‘These are a little hit or miss. I spent a month eating these, sometimes they were a culinary touchdown, other times I didn’t even want to let the seagulls eat them for fear of turning them off chips forever,’ Mr Bouchet said.

‘The issue here is that they’re a weird wedge/chip hybrid which means it’s difficult for them to be consistent. They’re well-salted and not too oily, but if I were Schnitz I’d rethink the shape.’

‘Here’s the thing with McDonald’s fries: they can sometimes be God Tier, but other times they’re inedible. The lack of consistency is what earns them their position,’ Mr Bouchet said.

‘From my twice-daily research over the period of a month (60-servings), I found they were perfect eight times, average 33 times and terrible 19 times.

‘If McDonald’s fries aren’t eaten within the first five minutes of coming out of the fryer, a formal apology should be made by McDonald’s to every potato that gave up their lives to end up in such a gross state.’ 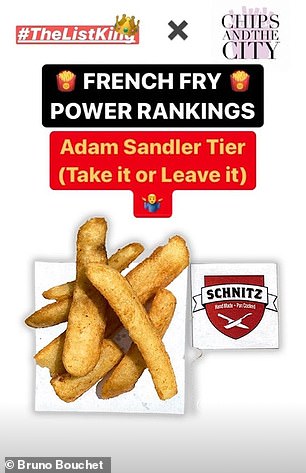 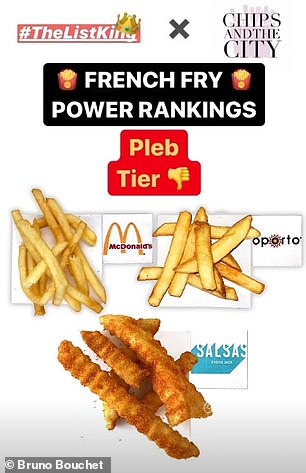 In the centre of his rankings, he put Schnitz in the ‘Adam Sandler Tier’, while he believed McDonald’s French fries belonged in the ‘Pleb Tier’, along with Salsas and Oporto

Despite having Oporto serving up deliciously perfect burgers, Mr Bouchet said he was ‘genuinely stunned’ by how bad the chips were.

‘It feels like Oporto spent so much times perfecting their burgers that they ignored the fact their chips are borderline edible. They were flavourless, not cooked through and the centre was often soggy,’ he said. 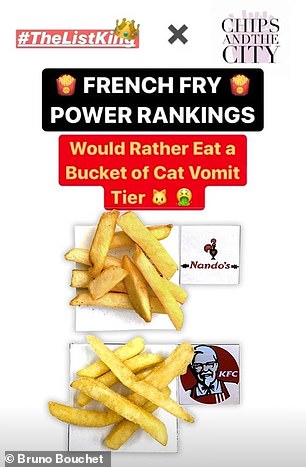 Lastly, the ‘Would Rather Eat a Bucket of Cat Vomit Tier’ included Nando’s and KFC

As for Salsas, he said: ‘Two words that always instil fear in a chip aficionado: crinkle cut. Whoever invented the crinkle cut chip should be jailed for serious crimes against humanity’s tastebuds. The chips at Salsas are way too seasoned and they ruined my day.’

Lastly, the ‘Would Rather Eat a Bucket of Cat Vomit Tier’ included Nando’s and KFC.

‘Let’s get real KFC: If it weren’t for the chicken salt, people would be out on the streets rioting,’ Mr Bouchet said.

‘I couldn’t find one single chip that could hold its own weight – they all buckled over. Sure, they can hide behind that chicken salt, but fry aficionados like us don’t fall for those kinds of gimmicks.’

As for Nando’s, Mr Bouchet said: ‘How can you go from having one of the best burgers in town to fries you wouldn’t even serve to prisoners?

‘These chips deliver a double whammy of greasiness on the outside and lukewarm potato mash on the inside.’