The Australian woman, known as Crystals Cooking Fun on TikTok, shared a now-viral video showing herself making the ‘easy’ and ‘lazy’ meal. 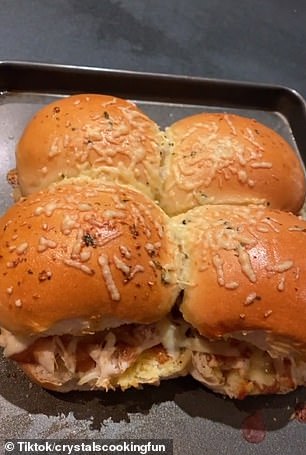 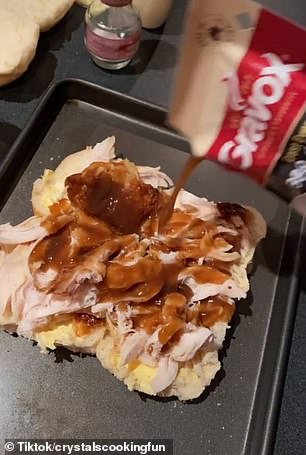 What you need to make pull apart sliders

She started by slicing all four of the pull apart rolls in half horizontally, leaving the bottom half slightly thicker than the top half.

Spread the pesto sauce over the bottom halves of the dinner rolls.

Next, she spread butter over the bottle half of the rolls, then a generous drizzle of Kewpie mayonnaise.

Using the roast chicken from Woolworths, she layered the cooked meat over the bottom half of the rolls, topped with ready-made gravy and cheese.

She placed the top half of the rolls, cut side down, on top of the mozzarella. She then brushed melted garlic butter over the top, before sprinkling parmesan over.

The home cook baked the pull apart sliders in the oven at 180 degrees for about five minutes, or until golden brown, and cheese has melted.

Her video has since been viewed more than 89,000 times, with many describing the sliders as a ‘game changer’ and the ‘most Australia CBF [can’t be f***ed] dinner’.

Dozens said the sliders are perfect to make when you have leftover ingredients.

‘Growing up, this was always our Sunday lunch, freshly cooked rolls from the supermarket with a roast chicken, so good,’ one wrote.

‘Thank you for sharing! I had chicken and bread rolls left over from last night’s BBQ. Best hangover food ever,’ another said.